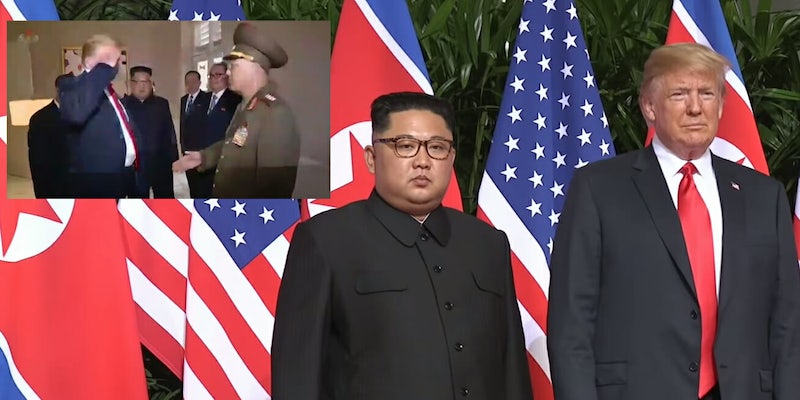 People online were not happy.

President Donald Trump is facing flak online after behind-the-scenes footage from his summit with North Korea appears to show him saluting a military officer from the country.

The video, released by North Korean state television, shows Trump walking with North Korean leader Kim Jong-un, and extending his arm for a handshake with a military officer. The officer responds by saluting Trump, who then salutes the officer back. The two then shake hands before he Trump continues on past him and shakes hands with several other officials.

BBC published the video on Thursday morning. The salutes begin around the 55 second mark.

North Korean TV has aired its first footage of the #TrumpKimSummit. Look out for the handshake/salute confusion 55 seconds in. pic.twitter.com/JS5yEUprgz

It has not been verified if the footage is authentic, Raw Story points out.

During a segment on CNN, Rear Admiral John Kirby—a retired Navy officer—said North Korea could see the salute as “propaganda” and that it shows the country’s citizens a “level of deference and respect that Trump has paid to them and their military leaders.”

“It was an inappropriate thing for him to do from a protocol perspective, but now he’s played right into the North’s propaganda about their legitimacy on the world stage,” Kirby said.

Earlier this week the president and North Korea signed an agreement that aims to denuclearize the Korean peninsula, although it’s light on details.

The president’s salute was bashed online.

This salute is now being used as propaganda in North Korea.

What would Truman and MacArthur say about this?

Do we need to make a note?

"Do not salute the enemy" pic.twitter.com/wVpjJVJkZI

Remember when Obama got shit for his “coffee salute”? Yeahhhh…… https://t.co/HoxezwqM6J

1) DO NOT CONGRATULATE DICTATOR.
2) DO NOT COMPLIMENT DICTATOR ON KILLING DRUG USERS.
3) DO NOT SALUTE DICTATOR’S GENERAL.

Trump’s No-No List is getting longer than his aides can write in sharpie on his tiny hands.#NorthKoreanSummit #KimTrumpSummit #TrumpKimMeeting #NorthKorea https://t.co/SgQJrD3HNe

If the footage is deemed authentic, it’s not the best optics for the president who used Wednesday to take a victory lap and bash critics of the trip on Twitter.