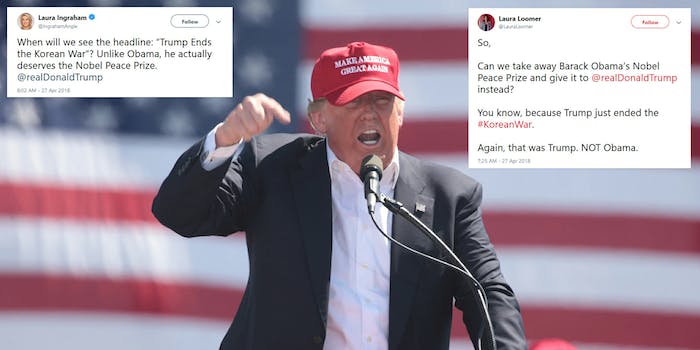 The suspense will be fraught until October.

As North Korea and South Korea begin historic peace talks to remove nuclear weapons on the Asian peninsula and attempt to reach an official end to the Korean War, some people think President Donald Trump should be rewarded.

North Korean leader Kim Jung-un and South Korean President Moon Jae-in announced today that they will negotiate a peace treaty and denuclearize the two countries, according to the New York Times.

Trump also weighed in, declaring that the Korean War would end.

“After a furious year of missile launches and Nuclear testing, a historic meeting between North and South Korea is now taking place. Good things are happening, but only time will tell!” the president wrote on Twitter early Friday. “KOREAN WAR TO END! The United States, and all of its GREAT people, should be very proud of what is now taking place in Korea!”

While the peace talks between the Korean countries are being heralded as historic, some of the president’s most ardent supporters online believe that he should receive a Nobel Peace Prize as a result of the meeting taking place. Earlier this year the president tweeted about having a “much bigger” nuclear button than North Korea.

But the chatter online wasn’t all. Sen. Lindsey Graham (R-S.C.) floated the idea of a Nobel Prize for the president when speaking with Fox News on Friday morning.

“It wouldn’t have happened without Trump. It may not happen, but it’s the biggest change since the end of the hostilities,” Graham said, according to the Washington Times. “What happened? Donald Trump convinced North Korea and China he was serious about bringing about change.”

“We’re not there yet, but if this happens, President Trump deserves the Nobel Peace Prize.”

This isn’t the first time Trump’s name has been associated with the prestigious award. Earlier this year the Norwegian Nobel Committee, which awards the prize, said Trump’s name was falsely nominated twice in the nomination process, the New York Times reported in February.

Graham’s sentiment was shared by many online, with many suggesting that the peace prize awarded to former President Barack Obama should be revoked.

When will we see the headline: “Trump Ends the Korean War”? Unlike Obama, he actually deserves the Nobel Peace Prize. @realDonaldTrump

North & South Korea will sign a peace treaty, ending their 68-year war, and agreed to complete denuclearization of the Korean Peninsula.

(Korean) Peace in our time…
Nobel Prize for @realDonaldTrump? pic.twitter.com/GmZpO0JX3I

Meanwhile, on r/The_Donald, a pro-Trump community on Reddit, the chatter of a Nobel Prize was strong—with at least one thread believing the award should be renamed the “Trump Peace Prize” in the future.

The 2018 Nobel Peace Prize is expected to be announced in October.