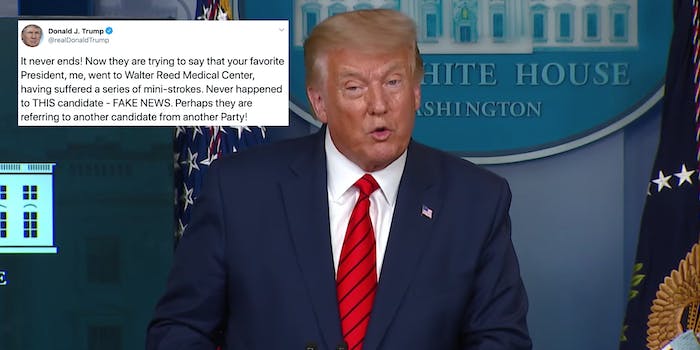 Rumors Trump had a stroke go viral, despite no evidence

The incident unfolded after CNN reported that Vice President Mike Pence had been placed on “standby” to assume the powers of the presidency during Trump’s unannounced visit late last year to Walter Reed hospital.

The claim, which appears in an upcoming book from New York Times reporter Michael Schmidt, has raised questions about the reason for Trump’s mysterious hospital visit.

The president at the time alleged that the visit was made to undergo routine tests as part of his annual physical, although the trip was never on Trump’s official schedule.

With the report circulating that Pence was prepped to potentially take the commander-in-chief’s place had the president undergone a “procedure that would have required him to be anesthetized,” old conspiracy theories about Trump suffering a stroke quickly resurfaced.

The hashtags #TrumpStroke and #TrumpIsNotWell began trending on Twitter as well. The president eventually weighed in on the matter not long after.

Others threw out speculation of a “cerebral event” despite it not being backed up by any kind of reporting.

“It never ends! Now they are trying to say that your favorite President, me, went to Walter Reed Medical Center, having suffered a series of mini-strokes,” Trump tweeted. “Never happened to THIS candidate – FAKE NEWS. Perhaps they are referring to another candidate from another Party!”

The original report regarding Pence never mentioned what brought Trump to the hospital in the first place. Claims regarding “mini-strokes” and “cerebral events” only surfaced on Twitter after the story was released.

The mini-stroke claim may have originated from author Don Winslow, who claimed to have received the information from White House insiders.

“I’ve received three communications saying that during his term Trump has suffered a ‘series’ of ‘mini-strokes,” Winslow tweeted.

Although Winslow blamed an incident in which the president was slurring on a potential stroke, many people at the time believed the issue was caused by loose-fitting dentures.

The allegation, which has not been corroborated, comes amid a growing clash between supporters of Trump and former Vice President Joe Biden over which presidential candidate’s mental health is least tarnished.