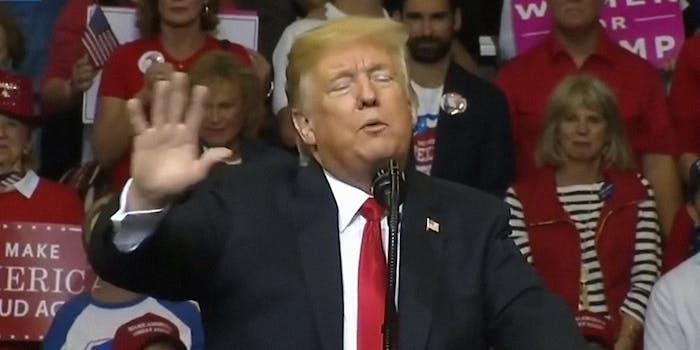 It's another statement in a long list of false claims made to rally his base.

With exactly two weeks to go until the 2018 midterms, President Donald Trump is attempting to rally his base by any means necessary. If that means resorting to outright falsehoods, well then, you know this president.

At a rally with for Sen. Ted Cruz (R-Texas), Trump announced that he would be getting a “10 percent tax cut for middle-income people” through Congress as early as next week, claiming he was working with Rep. Kevin Brady (R-Texas), who chairs the House Ways and Means committee.

Trump keeps talking about the tax cut nobody else including his aides knows anything about: "We're going to be putting in a 10% tax cut for middle-income tax families…Kevin Brady is working on it…all middle-income people, a big tax cut…we'll be putting it in next (week?)."

Says he and Kevin Brady have been working on it for "three months."

"That is in addition to the big tax cuts that you’ve already gotten."

If that sounds like something extremely inaccurate, that’s correct. Both the House and Seante are in recess until after the midterms, so their ability to pass any bill is non-existent, let alone a massive tax cut.

And yet, Trump has been hyping this for days now.

Some on Twitter are furious at Brady, who was at the rally, for sitting there while Trump announced fake legislation to a packed stadium.

Why do you say “poor Kevin Brady”. He didn’t have to stand there and give a thumbs up to trumps lie about tax cut. He works for his constituents, not trump.

Thoughts and prayers for Kevin Brady who now has to answer questions about Trump's 10% middle income tax cut.

Brady’s spokesperson directed questions about the bill’s reality to the House Ways and Means Committee, which did not immediately respond to the Daily Dot’s request for comment.

But these kinds of impossible promises are par for the course now.

As the midterms approach, and with the fate of Congress in flux, the president is playing to just about any issue he can to turn out Republicans. The effort began in earnest last week, with members of his party stoking fears about an immigrant caravan approaching our southern border, alluding, without evidence, that there are nefarious liberal donors behind it.

Then yesterday, Trump declared that the caravan was smuggling in people from the Middle East, which was refuted by a counterterrorism official.

Sadly, it looks like Mexico’s Police and Military are unable to stop the Caravan heading to the Southern Border of the United States. Criminals and unknown Middle Easterners are mixed in. I have alerted Border Patrol and Military that this is a National Emergy. Must change laws!

On his Twitter account, Trump is also exerting a great deal of effort to paint Democrats as an out-of-control, unruly mob—while using a photo taken at his own rally.

Today’s Democrat Party would rather protect criminal aliens than AMERICAN CITIZENS – which is why the Democrats must be voted OUT of OFFICE! #JobsNotMobs https://t.co/0pWiwCq4MH pic.twitter.com/axUEOzBAsZ

All these hot-button issues give Trump the opportunity to make unsubstantiated claims with the hopes they permeate conservatives minds, regardless of their grounding in reality.

Because earlier in the week, Trump said to reporters that when he was talking about a tax cut, he meant merely introducing a resolution in the next couple of weeks, not actually passing a bill.

Which won’t do anything for your taxes.