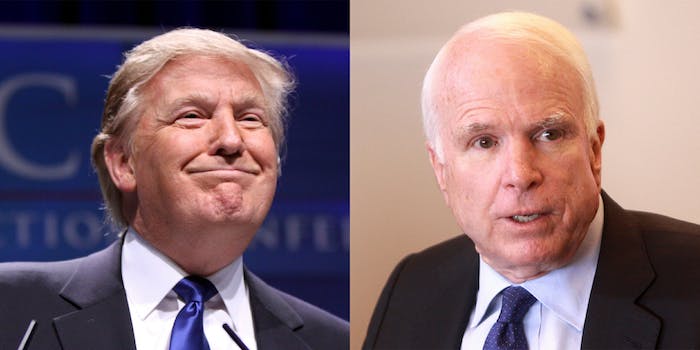 The internet begged for it—so here it is.

President Donald Trump on Monday issued a brusque statement about the death of Sen. John McCain (R-Ariz.) following a wave of criticism for his relative silence on the subject.

In the statement, Trump said “despite our differences on policy and politics” he holds “respect” for the late senator and that the White House will fly the American flag at half-staff in his honor until his funeral. McCain, 81, died Saturday following a battle with brain cancer.

Despite the longstanding feud and animosity between Trump and McCain, members of the media and other people on Twitter called for a statement from the president.

pres trump – you are commander in chief by law, duty bound to honor sen mccain
ignoring his death is a disgrace

Trump’s only acknowledgement of McCain’s death over the weekend was an Instagram post, and the White House faced backlash for raising the American flag back to full-staff on Monday morning.

Trump, who reportedly was not extended an invitation to McCain’s funeral and rejected an earlier statement celebrating the senator, said he would be sending Vice President Mike Pence and other members of the administration to the ceremony. Here’s his full statement:

Despite our differences on policy and politics, I respect Senator John McCain’s service to our country and, in his honor, have signed a proclamation to fly the flag of the United States at half-staff until the day of his interment.

I have asked Vice President Mike Pence to offer an address at the ceremony honoring Senator McCain at the United States Capitol this Friday.

At the request of the McCain family, I have also authorized military transportation of Senator McCain’s remains from Arizona to Washington, D.C., military pallbearers and band support, and a horse and caisson transport during the service at the United States Naval Academy.

Finally, I have asked General John Kelly, Secretary James Mattis, and Ambassador John Bolton to represent my Administration at his services.

Earlier on Monday, McCain’s family issued a farewell statement on his behalf, which was widely seen as a final if understated snub to Trump and his policy.

“We weaken our greatness when we confuse our patriotism with tribal rivalries that have sown resentment and hatred and violence in all the corners of the globe,” McCain said in his farewell.

Trump on Monday also ignored multiple questions from reporters about McCain during a press conference in the Oval Office, the Huffington Post reports. His statement came shortly after.