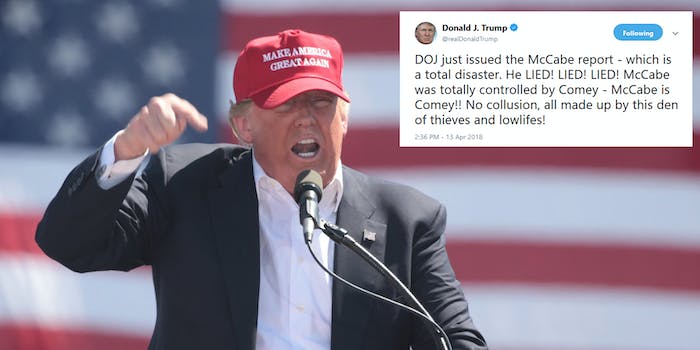 President Donald Trump aired out some choice words following the release of a report that was critical of former FBI deputy director Andrew McCabe.

The report, which says McCabe misled investigators when asked about whether he had instructed FBI aides to give information to the media about the Hillary Clinton investigation in 2016, caused Trump to lump in the other person who has been on his mind lately: former FBI Director James Comey. The president went as far to say the two of them were the same person and calling the agency a “den of thieves and lowlifes.”

“DOJ just issued the McCabe report – which is a total disaster. He LIED! LIED! LIED! McCabe was totally controlled by Comey – McCabe is Comey!! No collusion, all made up by this den of thieves and lowlifes!” the president wrote on Friday afternoon.

DOJ just issued the McCabe report – which is a total disaster. He LIED! LIED! LIED! McCabe was totally controlled by Comey – McCabe is Comey!! No collusion, all made up by this den of thieves and lowlifes!

The report, according to the New York Times, investigated the “leak” to the media outlet and whether McCabe “lacked candor.”

In what would appear to be a direct contradiction of Trump’s tweet, the report also suggests that McCabe misled Comey, not exactly something someone who is “controlled” would do.

McCabe, who was fired last month, has been a frequent target of Trump’s on Twitter. The president has bashed the former deputy director’s retirement plans and his wife’s political connections. Trump also reportedly asked him who he voted for in the 2016 election during a meeting shortly after he fired Comey.

Of course, Trump’s rage-tweet about McCabe was quickly mocked online.

McCabe is Comey! Comey is McCabe! Up is down! Down is Up! Sun is cold! Ice is hot! https://t.co/19pivwJkCK

It’s safe to say we’ll get more tweets like this after Comey’s much-hyped interview airs this weekend.