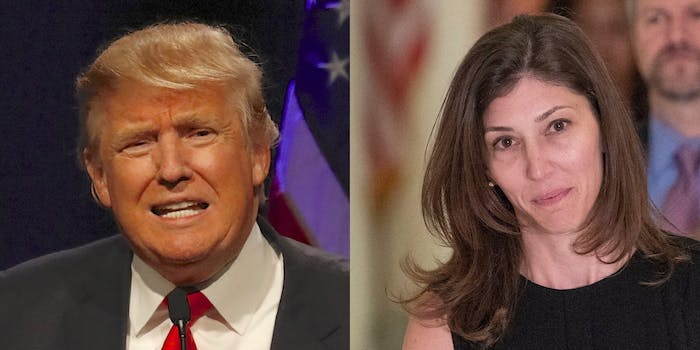 Was Trump really faking an orgasm??

Last night, former FBI lawyer Lisa Page gave her first major interview since becoming embroiled in the scandal that President Donald Trump has been obsessed with ever since he won the 2016 election.

Despite winning in 2016, Trump is still consumed with the idea that the FBI had an elaborate scheme to prevent him from ever taking office. At the center of it were two FBI employees, Page and Peter Strzok, who the president has repeatedly publicly threatened, mocked, and claimed they committed treasonous and seditious acts.

Page and Strzok were having an affair around the 2016 election, and their private conversations about Trump became the center of a swirl of conspiracies for the past three years.

Page described to the Daily Beast what it was like to be the focus of the president’s vitriol, and saying that “there’s no fathomable way that I have committed any crime at all.”

In the interview, Page goes on to say that she’s worried about what President Trump is doing to the Justice Department.

“It’s very painful to see to places like the FBI and the Department of Justice that represent so much of what is excellent about this country, not fulfilling the critical obligation that they have to speak truth to power.”

Asked why she finally spoke out, after years of silence, she said it was the president, who has routinely called her “Lovely” on Twitter, faking an orgasm at a rally a couple of months ago.

“Honestly, his demeaning fake orgasm was really the straw that broke the camel’s back,” she said.

Is the president doing an impression of Peter Strzok having an orgasm? pic.twitter.com/izFVmlfqaW

Trump, at a rally, got breathy and was panting while talking about Strzok and Page, in which most people could reasonably consider an intimation of something sexual.

Allow the Federalist’s Mollie Hemingway to explain how that clip wasn’t “sexual.”

“Page is quoted saying something about how she decided to speak out (not because the IG report is about to make her and her cohorts look bad) but because Trump faked an orgasm to mock her for her infidelities … I THINK the claim of a faked orgasm is a reference to Trump just making fun of the married Peter Strzok and Page carrying on an affair while planning their various anti-Trump efforts. I don’t see how anyone remotely knowledgeable [If You Know What I Mean, And I Think You Do] could describe this as a faked orgasm.”

People have already latched on to the idea that she’s lying about what she saw, which is wild, given how often the president has tweeted about her looks, and about them having sex, and then discussed the two of them at a rally in the way that he did.

I don't think there could be a possible better illustration of how to use IYKWIMAITYD than @MZHemingway Also, watch for press to cement the "fake orgasm" narrative as truth & folks to begin talking about the time Trump mocked political opponents with that. https://t.co/mHe3KTTiwL

get away witb that obvious lie. https://t.co/XfcnrjMZ2f

If Lisa Page can't describe a 1 min clip accurately, then I don't know how she expects anyone to believe her lies about her innocence. https://t.co/mO69mQJuFY

Mollie's right. Did anyone really interpret Trump in that clip as mimicking an orgasm? Maybe Lisa Page did, but I just took it as an overly lovey dovey conversation between Lisa Page & Peter Strzok. https://t.co/gLCoVCfvSg

All that said though, if you are willing to declare Trump wasn’t faking an orgasm there, it means you’d have to then say you have a different version of what an orgasm really looks like to the president.

Fun hill to die on!