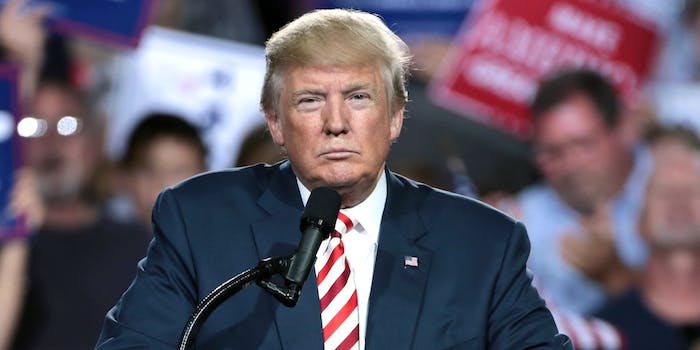 While sharing a tweet about Powell donating more than $500,000 to Biden’s campaign, Trump also attacked the widow over her ties to the Atlantic magazine.

“Steve Jobs would not be happy that his wife is wasting money he left her on a failing Radical Left Magazine that is run by a con man (Goldberg) and spews FAKE NEWS & HATE,” Trump tweeted. “Call her, write her, let her know how you feel!!!”

The president has spent the last several days attacking the Atlantic after sources speaking to the publication accused Trump of calling soldiers who died at war “losers” and “suckers.”

Trump has repeatedly denied the allegations even as numerous outlets, including Fox News, the Washington Post, the New York Times, the Associated Press, and CNN have backed the story.

The remarks from the president about Powell immediately drew backlash online. The term “Steve Jobs” also began trending on Twitter as well.

“What kind of sociopath would attack a widow (Laurene Powell) speaking as their dead husband (Steve Jobs)?” @funder asked. “Trump just did. Abhorrent and revolting.”

Trump appears to have had an issue with Powell for several years, complaining that the widow inherited billions of dollars following her husband’s death in 2011.

“So, let’s get this right. Steve Jobs dies and leaves his wife everything-billions of dollars,” Trump tweeted in 2013. “Now his wife has a boyfriend (lover). Oh Steve!”

The Atlantic’s editor-in-chief Jeffrey Goldberg, whom Trump referenced in his tweet, argued that the president’s remarks represent a clear threat to Powell.

Powell’s last tweet, made on Thursday, has since been bombarded by Trump supporters.