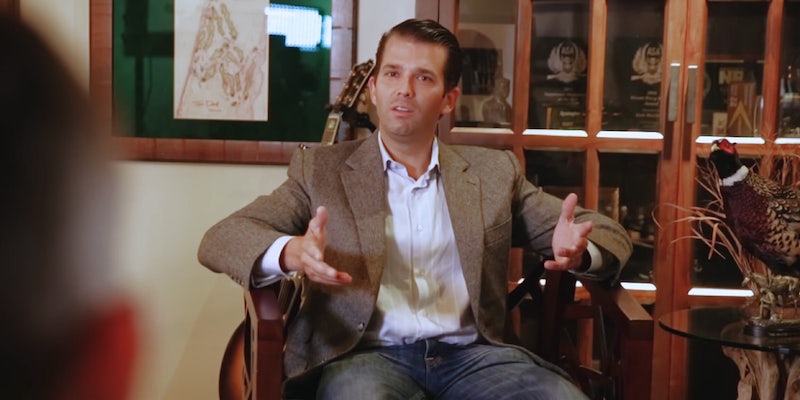 Trump Jr. called silencers a great way to get kids into guns

'It’s about safety, it’s about hearing protection–it’s a health issue frankly,' he said.

Donald Trump Jr. appeared in a promotional video for gun silencers in the run-up to the 2016 election, arguing that the devices make it easier for kids to use guns.

In the video, Trump Jr. fires a gun with a silencer, also known as supressors, on it in rapid succession as gentle music plays in the background.

When his clip empties, Trump Jr.–an avid hunter–turns around to someone and says “that thing is awesome.”

“It’s about safety, it’s about hearing protection–it’s a health issue frankly,” Trump Jr. says during an interview portion of the video. “Getting little kids into the game, you know, it greatly reduces recoil. It’s just a great instrument, there’s nothing bad about it at all. It makes total sense, it’s where we should be going.”

The video was made for Silencerco, a Utah-based firearm suppressor manufacturer. After the video was released, Josh Waldron, the interviewer and CEO of SilencerCo, and his wife donated a combined $50,000 to the Trump Victory fund–a political fund–and each gave $2,700 to Trump’s campaign directly, according to the Daily Beast.

The video comes as Democrats continue to push for gun control in the wake of the Las Vegas shooting, which left nearly 60 people dead and more than 500 people injured.

A silencer decision from Trump may be on the horizon. The Hearing Protection Act, which is part of the Sportsmen’s Heritage and Recreational Enhancement (SHARE) Act, would make it easier for people to buy gun silencers by removing them from the list of regulated items under the National Firearms Act of 1934.

A hearing on the Hearing Protection Act was rescheduled due to the Las Vegas shooting. President Donald Trump‘s administration has said it is not the “time or place” to discuss gun control in the wake of the shooting.