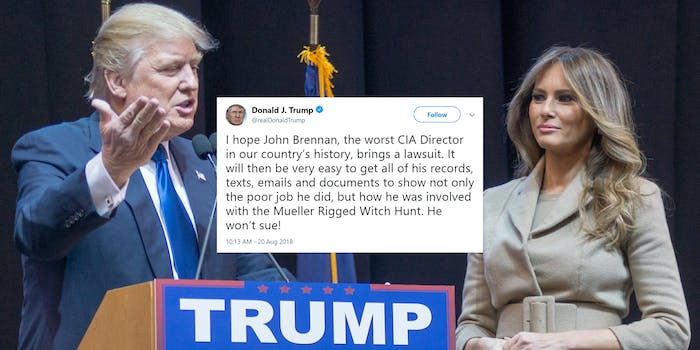 The timing is almost ridiculous.

That First Lady Melania Trump is spearheading a campaign against cyberbullying while President Donald Trump finds a new target for his online vitriol seemingly every day is more than just ironic at this point. It almost seems downright intentional.

On Monday, First Lady Melania Trump spoke at a cyberbullying prevention summit on behalf of her “Be Best” campaign. The former model warned about the dangers that children face on social media and remarked that platforms such as Twitter, Facebook and Instagram could be “harmful when used incorrectly.”

Not even an hour after her speech, President Trump attacked former CIA Director John Brennan on Twitter after revoking his security clearance.

I hope John Brennan, the worst CIA Director in our country’s history, brings a lawsuit. It will then be very easy to get all of his records, texts, emails and documents to show not only the poor job he did, but how he was involved with the Mueller Rigged Witch Hunt. He won’t sue!

Mrs. Trump’s campaign has been uninspired and toothless from inception. “Be Best” not only closely mirrors similar initiatives created by former First Lady Michelle Obama but the program pamphlets are nearly identical to those administered by the FTC.

Many of the core beliefs of the initiative can be found on the official website, including a portion titled “Social Media,” which states Mrs. Trump’s beliefs on the proper use of social media.

“Mrs. Trump believes that children should be both seen and heard, and it is our responsibility as adults to educate and reinforce to them that when they are using their voices—whether verbally or online—they must choose their words wisely and speak with respect and compassion.”

Meanwhile, her husband has used his Twitter platform to refer to other adults as “dopey,” “dumb,” “weak,” and “sad!” and just last week called former White House aide Omarosa Manigault-Newman “that dog.”