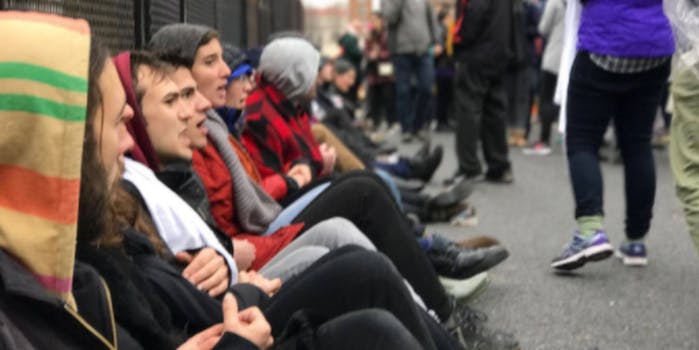 'Hey hey! Ho ho! White supremacy has got to go'

The effort to disrupt Trump’s inauguration was largely organized by a group known as Disrupt J20, which has organized multiple protests throughout this week and a rally and march on Inauguration Day.

The group began with a march that started at 9am ET.

No Trump No KKK No Fascist USA #DisruptJ20 #TrumpInauguration pic.twitter.com/DIlTVBqCk5

Protesters successfully shut down 6six of the 12 inauguration access points as of 10am ET on Friday morning.

Police reportedly began dragging protesters who were forming a blockade at a checkpoint at 14th and Pennsylvania Avenue N.W. and detaining them.

Police sawed off a PVC pipe that linked protesters arms together. Newsweek journalist Emily Cadei reported that police put a bag over one protester’s head.

Police put a bag on one protester's head as they prepare to saw off pvc pipe connecting people's arms #InaugurationDay2017 pic.twitter.com/TKcEewtvB9