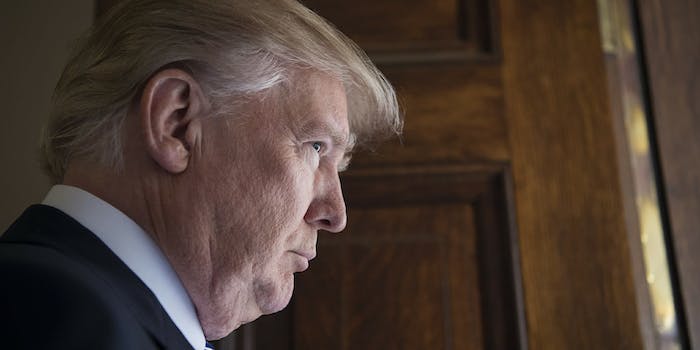 Photo via Secretary of Defense/Flickr (CC-BY)

President Donald Trump is back in the United States from his first trip abroad—and with that comes a flurry of new eyebrow-raising tweets.

The president started his morning by taking shots at Germany, calling the country’s contributions to the North Atlantic Treaty Organization (NATO) “very bad for the U.S.” That’s after German Chancellor Angela Merkel said, after meeting with Trump at the NATO summit last week, that Europe could no longer count on U.S. leadership.

We have a MASSIVE trade deficit with Germany, plus they pay FAR LESS than they should on NATO & military. Very bad for U.S. This will change

Stoking the flames of international tensions with one of America’s most powerful allies is news all on its own. But Trump was just getting started. Roughly 25 minutes later, the president claimed that Russia is “laughing at the U.S.” due to media coverage of investigations into Moscow’s meddling in the 2016 election, as well as its potential links to the Trump campaign, which he once again dubbed “fake news.”

Russian officials must be laughing at the U.S. & how a lame excuse for why the Dems lost the election has taken over the Fake News.

Regardless of how the Democrats are trying to spin the Russia story, a key fact remains: There are currently five ongoing investigations into Russia and the Trump campaign, four in Congress and one led by Special Prosecutor Rober Muller, the former FBI director. Deputy Attorney General Rod Rosenstein appointed Muller to take over the investigation after Trump suddenly fired former FBI Director James Comey.

Trump’s next tweet, however, likely caused the most chatter—at least among those who’ve been paying close attention to the ongoing fights over healthcare and taxes.

The U.S. Senate should switch to 51 votes, immediately, and get Healthcare and TAX CUTS approved, fast and easy. Dems would do it, no doubt!

The dangers of eliminating the legislative filibuster aside, this tweet quickly caught fire due to the fact that Republicans are already planning to maneuver their Affordable Care Act replacement bill and tax reform through the Senate with a simple majority. That’s because they both fall under a process called budget reconciliation, which only requires 51 votes to pass, not a 60-vote supermajority that would require Democratic cooperation. (Republicans currently hold 52 seats in the Senate.)

Political wonks were quick to call Trump out for his unnecessary demand.

Uh, both of these items are supposed to be under reconciliation and thus only need 51 votes — votes the Republicans don't have now. https://t.co/fUJaLW588k

This shows how Trump simply does not understand governing. Health care and tax cuts were both proceeding on 51-vote threshold. https://t.co/w6ysr6ns3S

Remember that on health care and tax reform, senators are already planning on using reconciliation which can't be filibustered! https://t.co/2jTL5HRn0i

To cap off his morning tweets, Trump retweeted a Fox News story that refutes reports from the Washington Post and New York Times (both published on Friday) that Jared Kushner, the president’s son-in-law and a White House adviser, attempted to set up “back channel” communications with Russia.

The Post and Times reports are both based on information provided by anonymous sources, a journalistic practice that is necessary, legitimate—and often untrusted by readers. Readers like Trump, who tweeted on Sunday that news reports that use anonymous sources may simply be entirely made up.

Whenever you see the words 'sources say' in the fake news media, and they don't mention names….

….it is very possible that those sources don't exist but are made up by fake news writers. #FakeNews is the enemy!

That assessment apparently does not apply to Fox News, which based its report on Kushner on a single anonymous source. (The Post‘s report cited multiple “U.S. officials,” while the Times credited “three people with knowledge of the discussion.”) Adding to the questionable nature of the Fox News report: It has no byline, meaning no reporter put their name on the piece. (Fox News intelligence reporter Catherine Herridge is credited with contributing to the report, but it doesn’t indicate that she wrote it.)

All said, it appears America has returned to the bizarre new normal of 2017.