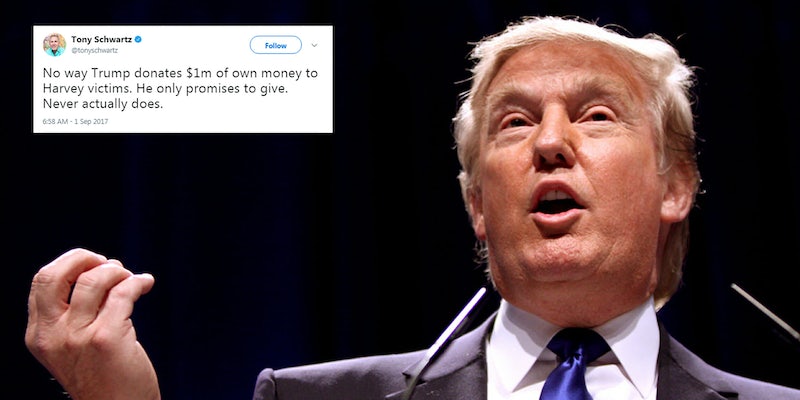 How will we know if Trump actually donates $1 million to Harvey relief?

Without his tax returns, it's virtually impossible.

The White House announced on Thursday that President Donald Trump would donate $1 million of his “personal money” to the Hurricane Harvey relief efforts—but the ghostwriter of the president’s book, The Art of the Deal, says that’s not going to happen.

“He only promises to give,” Tony Schwartz wrote. “Never actually does.”

No way Trump donates $1m of own money to Harvey victims. He only promises to give. Never actually does.

Schwartz isn’t the only one who questioned whether Trump will donate money, let alone his “personal money,” to causes. So how would someone know whether or not Trump actually donates the funds? It’s tricky.

White House Press Secretary Sarah Huckabee Sanders did not say whether the money would be from Trump’s own bank account or from the Trump Organization. Sanders also did not specify what organization the president would be donating the money to.

Trump’s philanthropic donations have been scrutinized in the past. Last year, the Washington Post found that Trump has boasted about giving money to foundations, but the newspaper was unable to verify many of his claims.

The Post called more than 420 charities with connections to Trump and only found one that had received a personal gift from Trump—the Police Athletic League of New York City, a charity that works to prove police officers with access to summer camps and afterschool programs for children of cops—and it was less than $10,000.

The easiest way to find out whether or not the president donates his $1 million pledge (or any other philanthropic endeavor) would be to examine his tax returns.

However, since Trump is the first president in decades who has not released his tax returns for public consumption, it would be very difficult to verify his $1 million pledge. The president has said he might release his tax returns once he leaves office, so the answer might be several years away.

Short of examining the president’s tax returns, the only other way to verify whether or not Trump does stay true to his word on his $1 million pledge would be to ask individual charities that are doing relief work in Houston. A charity could, of course, announce the donation—but that’s not guaranteed.

All that said, if any charity does receive money from Trump, there’s good reason to bet the White House makes sure we all know about it.