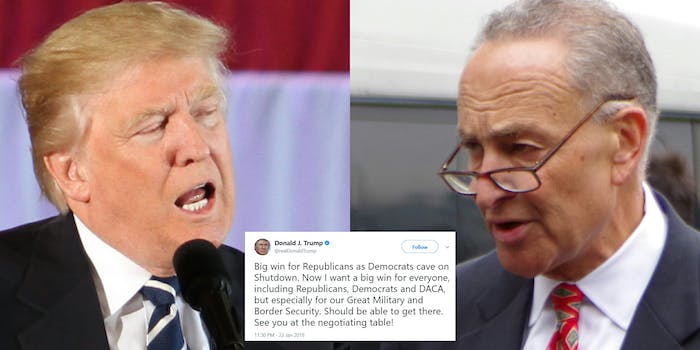 Trump may be right.

President Donald Trump twice declared that Democrats “caved” on a deal to reopen the government, bragging that the compromise was a big win for Republicans.

The deal between a group of senators led by Sen. Susan Collins (R-Maine) funds the government until Feb. 8, while the Senate works out a plan to keep the Deferred Action for Childhood Arrivals (DACA) recipients in the U.S. It received 81 votes in the Senate.

In a tweet last night and one this morning, after the House passed the deal and sent it to his desk to sign, Trump announced victory.

Big win for Republicans as Democrats cave on Shutdown. Now I want a big win for everyone, including Republicans, Democrats and DACA, but especially for our Great Military and Border Security. Should be able to get there. See you at the negotiating table!

Trump’s message echoes that of the progressive left, who wished that Democrats had held strong on their stance from a week ago that a deal to fund the government include protection for DACA recipients (known as Dreamers). In a nod to that wing of the party, several prominent Democrats who are likely to run in 2020 voted against the deal.

There is a concern among that wing of the party that a promise to vote on DACA and the DREAM Act could be just that: a promise the Republicans won’t be beholden to, especially with the leverage of a shutdown removed.

Even if the Senate does cobble together a deal to protect the Dreamers, there’s a strong possibility that the House won’t take up any legislation that codifies protections for undocumented immigrants. The reverse happened in 2010 when the House passed a DREAM Act, but the Senate couldn’t reach 60 votes.

The House majority is now flipped, and in his push to get a funding bill through, Speaker Paul Ryan (R-Wisc.) promised almost the exact opposite to his most raucous caucus, agreeing to consider legislation from the House Freedom Caucus that would be more stringent on immigration and which would likely have little chance in the Senate.