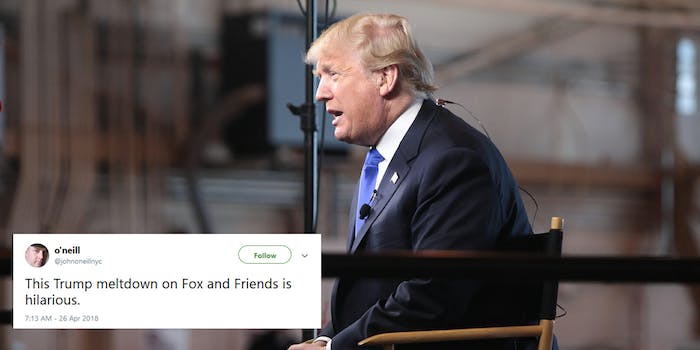 Trump went on ‘Fox & Friends’ and things got extremely weird

Some people called it a 'meltdown.'

President Donald Trump called into Fox & Friends on Thursday morning for a sprawling interview where he blasted former FBI Director James Comey, brought up old gripes about the 2016 election, and praised Kanye West.

The president also suggested to those watching that he didn’t get First Lady Melania Trump a birthday present–only a “beautiful card.”

Trump, who was practically screaming on the phone at points, seemed to relish the time to speak directly to his supporters through the program. The Fox hosts tried at multiple points to interject, but the president jumped from topic to topic that seemed to be on his mind.

The last question from the Fox & Friends was about how Trump would grade his presidency so far–and his answer was exactly what you’d expect.

“I’m fighting a battle against a horrible group of deep-seated people,” Trump said, adding: “I’ve been able to escape that cloud… I would give myself an A+. Nobody has done what I’ve been able to do and I did it despite the fact that I have a phony cloud over my head that doesn’t exist.”

It was a lot to take in.

I have seen three year olds on a sugar high give more coherent accounts of their actions than Trump just now.

This Trump meltdown on Fox and Friends is hilarious.

Trump is calling in to Fox and Friends this morning for something that would be the opposite of a fireside chat.

The president…seems to have a lot he wants to get off his chest.

Others commented on the substance of the interview.

The president is in rare form this morning, and these three can't get a word in edgewise, though they're trying pic.twitter.com/O5zOjxYxer

First revelation of Trump on “Fox & Friends”: he says he didn’t have time to buy Melania a birthday present.

Listening to @realDonaldTrump on @foxandfriends . Essentially a 20 minute monologue sounding like an unhinged raver. It’s scary.

Trump's Fox friends, while asking some good questions, are interrupting the president's rantings and ravings to try to help him.

It's like interrupting your racist grandpa in front of a group of people before he gets himself into big trouble. #foxandfriends

Fox & Friends host Steve Doocey ended the interview by saying the president “had a lot to say.”