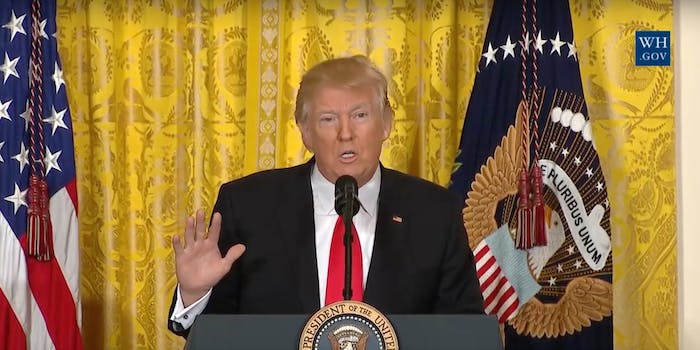 This is a must-watch event.

President Donald Trump on Thursday delivered a wild, more than hour-long White House press conference that began with the introduction of his new labor secretary nominee, Alex Acosta. Then it spanned everything from “fake news” to “nuclear holocaust.”

In a style Trump has rarely employed since the campaign trail, the president took questions on a slew of different issues from a wide range of reporters and answered with candid clarity in a conversational tone. The press conference lasted more than an hour and 15 minutes, sending Twitter aflutter with virtually every new line.

Your reaction to the press conference likely depends on who you voted for on Election Day. Trump supporters will likely see a straight-talking president standing by his commitments to the American people, and unafraid to take tough questions from the press.

Critics will likely see a baffling display from a president losing his grip on reality.

Regardless of the reactions, the press conference is sure to be a talking point in the United States and around the world for days.

If reading is more your thing, here’s the full transcript, provided by the New York Times.