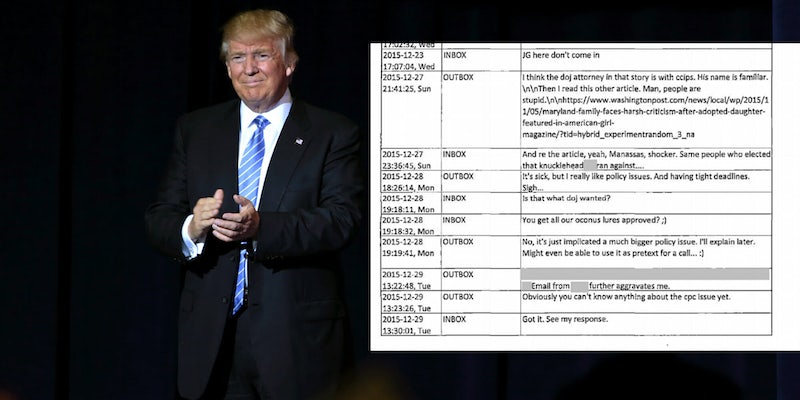 President Donald Trump went on a baseless, late-night rant against the FBI on Tuesday, continuing to rail against corruption in the Bureau and his belief there was a conspiracy to take down his campaign.

Wow, Strzok-Page, the incompetent & corrupt FBI lovers, have texts referring to a counter-intelligence operation into the Trump Campaign dating way back to December, 2015. SPYGATE is in full force! Is the Mainstream Media interested yet? Big stuff!

But the bold claim the president made, that the FBI began spying on his campaign in December 2015, is based on a loose interpretation of a single text.

The news of this earlier counter-intelligence operation started percolating yesterday morning, with the release by the Senate of more unredacted texts between FBI agent Peter Strzok and FBI lawyer Lisa Page.

At the heart of the matter is the phrase “Oconus Lures,” referred to by Strzok in a Dec. 28, 2015 text, asking Page if she got them approved.

It was jumped on as evidence the FBI was spying on Trump.

But the speculative question—”Is this an admission that the FBI wanted to run a baited Sting Op using foreign agents against Trump?”—posited on Twitter isn’t really answered. In the immediate context of the conversation, there’s no proof that the two were talking about the Trump campaign.

Yet the release of the texts and the online interpretation blew up in the conservative mediasphere. From the Gateway Pundit:

The US Senate today released over 500 pages of information related to the Spygate scandal.

Hidden in the information are unredacted Strzok – Page texts that show the FBI initiated actions to insert multiple spies in the Trump campaign in December 2015.

Framed that way—despite the lack of evidence, and also the fact that the response to “did you get your spies approved?” is “No”—it’s suddenly proof former FBI Director James Comey perjured himself.

As we reported previously, according to far left Politico, Comey stated in March of 2017 under oath that the FBI investigation into the Trump – Russia scandal started in July 2016:

But Comey appears to have lied about this.

The news worked its way through the online ecosystem, getting the attention of Lou Dobbs.

Here’s link to over 500 pages of docs including Strzok-Page texts which refer to “oconus lures”: https://t.co/egP9yGCISo …

That was enough to get near the president, who unleashed about it online last night in a series of tweets.

Wow, Strzok-Page, the incompetent & corrupt FBI lovers, have texts referring to a counter-intelligence operation into the Trump Campaign dating way back to December, 2015. SPYGATE is in full force! Is the Mainstream Media interested yet? Big stuff!

Great interview by @LouDobbs with Chris Farrell of Judicial Watch concerning the governments counter-intelligence operation into the Trump Campaign. SPYGATE at the highest level. Who would believe?

Chris Farrell, Judicial Watch. “They were running an operation to undermine a candidate for President of the U.S. These are all violations of law. This is intelligence tradecraft to steer an election. There’s nothing more grave when it comes to abuse of our intelligence system…

…This is a level of criminality beyond the pale. This is such a grave abuse of power and authority, it’s like nothing else we’ve seen in our history. This makes the Nixon Watergate burglary look like keystone cop stuff

And that’s how another entire scandal comes to be, kids.