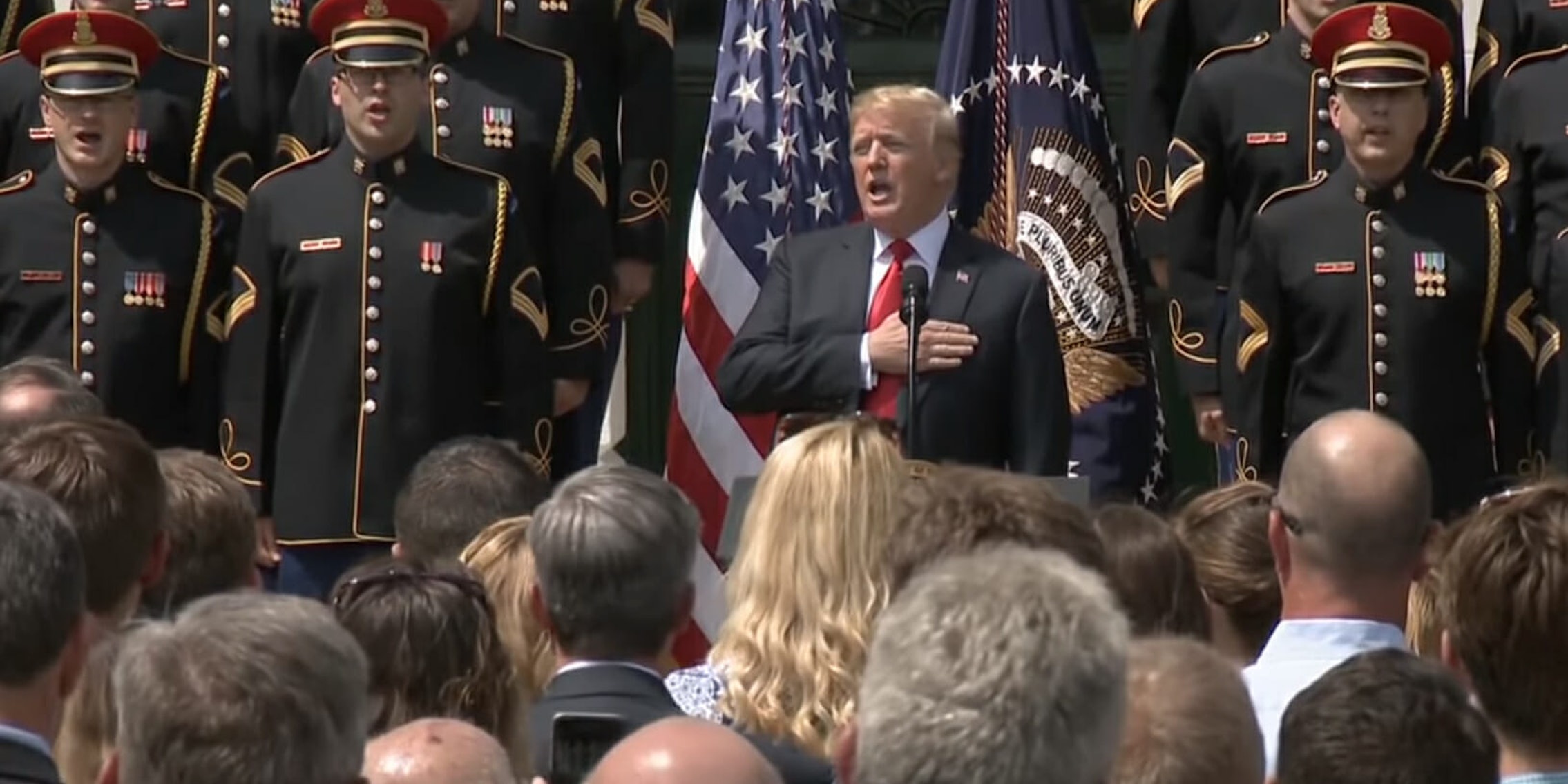 One reporter said people at Trump's event couldn't say who the Eagles' QB was.

As the drama between President Donald Trump and the Philadelphia Eagles peaked on Tuesday afternoon with the president’s hastily put together “Celebration of America” event, some people couldn’t help but wonder if the supposed fans of the team weren’t who the White House claimed they were.

The White House said multiple times that 1,000 fans of the Eagles were planning to attend an event where the team would be honored for winning the Super Bowl earlier this year.

However, while the crowd seemed much smaller than the 1,000 the White House said were scheduled to attend, some people on Twitter suspected the people who actually showed up may not have been the die-hard fans you might expect.

Trump abruptly canceled the event on Monday night, citing a disagreement between him and some of the players regarding protests during the national anthem, which are meant to shine a light on police brutality and oppression of people of color.

No Eagles players knelt during the anthem during the regular season or postseason.

The White House then released another statement where they blamed the team for promising to send only a handful of players to the event, saying that the Eagles “decided to abandon their fans.” To replace the scheduled event, Trump cobbled together a “Celebration of America” event where people gathered in front of the White House to listen to the national anthem and watch the president butcher the words to “God Bless America.”

While the event was meant to have Eagles fans in attendance, the internet is suspect any even showed up.

As one local reporter from Philadelphia pointed out, the people at Trump’s event didn’t know much about the Super Bowl winning team.

Not exactly sure who these @Eagles “fans” are but I have counted exactly one item of clothing with an eagles logo on it at the White House. #Eagles #EaglesNation @NBCPhiladelphia pic.twitter.com/XAo9u6L2F2

I’ve asked 6 of the “fans” at the White House who was the @Eagles quarterback during the super bowl. Not ONE person knew. @NBCPhiladelphia

Then, of course, came the speculation that the White House had stacked the crowd to make his “Celebration of America” seem more popular, considering it was hastily put together. Slate reported that the people at the event “looked suspiciously like White House and Congressional interns.”

Others just mocked the whole situation.

The fake president is having a fake celebration with fake Eagles fans to put on a display of fake patriotism. https://t.co/W19Vjvu5sN

HOW DARE THE EAGLES ABANDON THEIR FANS https://t.co/aAcehVi38N

Yesterday at Trump's fake celebration, there were more people kneeling during the playing of the national anthem than 'fans' in Eagles jerseys.

Will someone tell @realDonaldTrump that the majority of the players on the Eagles are POC and that if you are gonna stage an event with fake fans for fake patriotism you might want to pay for some POC to make it look somewhat authentic… Fucking racist moron… #whiteout https://t.co/3taqsFJQ8n

If anyone believes this crowd was made up of Eagles fans, you are an idiot. Another political stunt by the unstable one living in the WH. At least one of the "crisis actors" had the balls to protest the fake Patriotism. https://t.co/gYfeOaeozH

But perhaps there were some actual Eagles fans in attendance. One man, who shouted at Trump at the beginning of his remarks, was apparently booed by those in attendance and called a “Cowboys fan,” according to CNN.

After the anthem, this man shouted “stop hiding behind the armed services & the national anthem.” He was booed then called a Cowboys fan pic.twitter.com/ZjfDGLFbxB

To be fair, that is probably something that fans of rival football teams would think is a stinging insult.