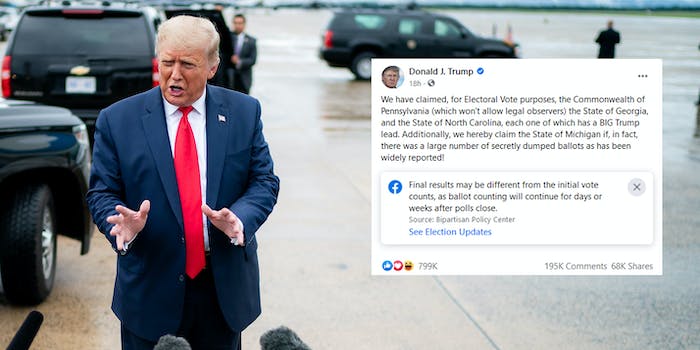 President Donald Trump’s misleading election post where he said he “claimed” a number of states in the 2020 election is among the most popular posts on Facebook, according to reports.

On Wednesday evening, the president posted on Twitter and Facebook that his campaign “claimed” Pennsylvania, Georgia, North Carolina, and Michigan. He continued on, claiming without evidence that there were “secretly dumped ballots” in Michigan.

Presidential campaigns do not “claim” states, so it’s unclear what the president was saying other than disputing the incoming results of the election. No winner has been called, as states continue to count ballots.

Amid all of this, Trump has tried to attack the integrity of the vote, making unfounded claims of fraud.

Facebook meanwhile added a label that reads: “Final results may be different from the initial vote counts, as ballot counting will continue for days or weeks after polls close.”

Other posts from Trump on Thursday had a more direct label added to it that says “votes are being counted. The winner of the 2020 Presidential Election has not been projected.”