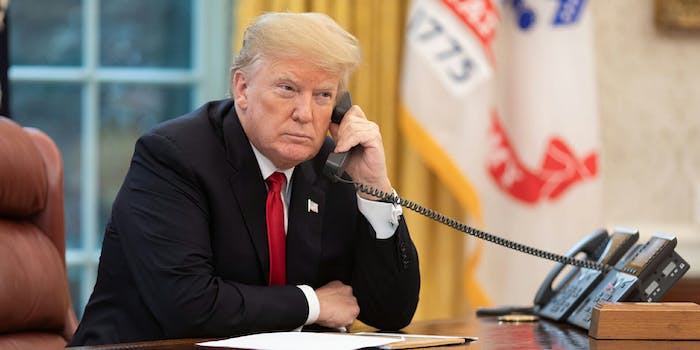 A tweet from President Donald Trump appears to have accidentally revealed that a U.S. Navy SEAL team was deployed in Iraq.

As first flagged by Newsweek, a tweet from the president on Wednesday from his visit to troops in Iraq where he posed with soldiers appears to have revealed classified information regarding SEAL Team Five.

The video posted by Trump shows highlights of his trip with “God Bless the USA” by Lee Greenwood playing in the background.

“[email protected] Melania and I were honored to visit our incredible troops at Al Asad Air Base in Iraq. GOD BLESS THE U.S.A.!” the president tweeted.

.@FLOTUS Melania and I were honored to visit our incredible troops at Al Asad Air Base in Iraq. GOD BLESS THE U.S.A.! pic.twitter.com/rDlhITDvm1

In the video, the president poses for pictures with troops who appear to be from SEAL Team Five. During his visit, according to pool reports, Trump asked to take a picture with someone who told him he was the chaplain for the special operations forces unit.

Officials told Newsweek that typically information about what units are deployed where is classified. The president and first lady visited approximately 100 special operations troops at Al Asad Air Base who are serving in Iraq and Syria, according to pool reports.

“Operational security is the most important aspect of personnel deployments. The real names, faces, and identities, of personnel involved in special operations or activities, are usually a closely held secret in a combat zone,” Malcolm Nance, a former U.S. Navy intelligence specialist, told the news outlet. “Revealing them casually, through an unusual media exposure even if it’s the commander in chief, would prove a propaganda boom if any of this personnel are detained by a hostile government or captured by a terrorist group. There would be no denying who you are and what you do.”

The president does have the ability to declassify information.

You can read all of Newsweek‘s report here.