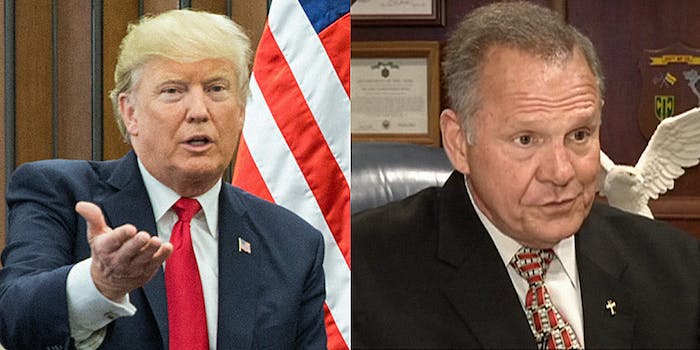 In the past few weeks, the Moore campaign has been embroiled in scandal as reports came out about his sexual assault of a teenage girl and relationships with other underage women.

Trump had waffled on supporting Moore—originally campaigning for his primary opponent Luther Strange—before going mum after the reports against Moore surfaced. But his support has grown as the election neared and this morning he told Alabamans to vote for Moore, who is an accused pedophile.

Democrats refusal to give even one vote for massive Tax Cuts is why we need Republican Roy Moore to win in Alabama. We need his vote on stopping crime, illegal immigration, Border Wall, Military, Pro Life, V.A., Judges 2nd Amendment and more. No to Jones, a Pelosi/Schumer Puppet!

Putting Pelosi/Schumer Liberal Puppet Jones into office in Alabama would hurt our great Republican Agenda of low on taxes, tough on crime, strong on military and borders…& so much more. Look at your 401-k’s since Election. Highest Stock Market EVER! Jobs are roaring back!

Trump’s endorsement comes in the wake of the Senate’s slim passage of its tax reform bill, 51-49. The bill heads to reconciliation now and will need to be approved again by the Senate after it is combined with the version the House passed. That process will likely occur after Alabama’s election on Dec. 12.

Later this week, Trump heads to Pensacola, Florida, on the Alabama border for a rally. Trump has not said if he will campaign for Moore.

Over the weekend, Senate Majority Leader Mitch McConnell (R-Ky.), who had previously said Moore should drop out of the race, said he now believes it is up to the people of Alabama to decide if Moore is fit for office,

According to reports, Trump concluded the call with “Go get ’em, Roy.”