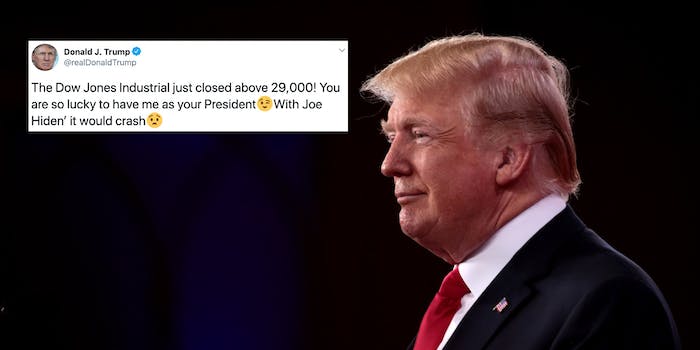 Did the president just find his emoji keyboard?

President Donald Trump used emoji in a tweet on Wednesday, causing a wide range of reactions from perplexed Twitter users.

In a tweet regarding the stock market, Trump used a winking face emoji as well as an anguished face emoji while telling Americans how thankful they should be for his presidency.

“The Dow Jones Industrial just closed above 29,000!” he said. “You are so lucky to have me as your President. With Joe Hiden’ it would crash.”

Supporters of the president, unsurprisingly, lavished praise on Trump for his incredible emoji use.

Others were just simply confused, wondering whether Trump had ever used an emoji before in his life.

“Emojis,” @JarrettBellini said. “This is new.”

But many questioned whether Trump actually used the emoji at all, suggesting that an aide could have crafted the tweet instead.

At least one Twitter user suggested that Trump may have very well made the tweet given that it did not include spaces around the emoji, a mistake only an emoji novice would make.

“Spaces before and after emoji, Mr. Trump,” @Ramanan_V.

A tweet made 10 minutes later by the president about “Anarchists, Agitators and Looters,” however, did not include any emoji at all.

It remains unknown whether Trump will continue using emoji to berate his political rivals in the future.