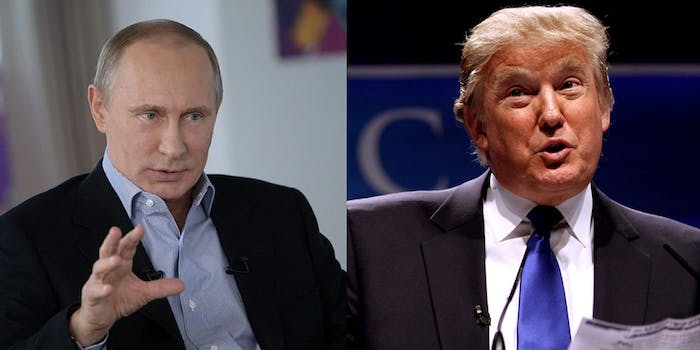 In case you forgot, the Russia investigation is still happening.

With violence in Charlottesville, rancorous campaign-style rallies, and a war of words with North Korea, no one would blame you for forgetting about the ongoing investigation by both houses of Congress and the Justice Department into Russia.

Well, the investigation has now come back into the spotlight.

An email from a top aide to President Donald Trump uncovered by congressional investigators references an unreported attempt to arrange a meeting between Trump campaign officials and Russian President Vladimir Putin.

CNN first reported on the uncovered email, which was sent by Rick Dearborn, a former Trump campaign adviser who is now Trump’s deputy chief of staff.

Dearborn’s email was “brief,” CNN reports, and was sent to campaign officials relaying information about a person who wanted to connect members of the Trump campaign and Putin.

The person in the email was only identified as being from “WV”—believed to be West Virginia. CNN called the details about the request “vague,” and it remains unclear whether Dearborn acted on the request.

The email was sent around the same time as the now infamous meeting between Donald Trump Jr., Paul Manafort, Jared Kushner, and a Russian lawyer who allegedly promised to deliver damaging information on Hillary Clinton to Trump’s campaign.

CNN spoke to intelligence experts who said the Russians are “experts” at trying to get people to work for them, at times unwittingly.