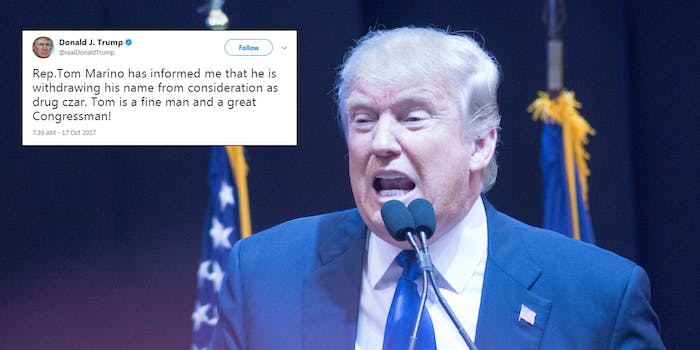 A recent investigation found that Rep. Tom Marino had pushed for legislation that benefited pharma companies.

President Donald Trump announced on Tuesday that Rep. Tom Marino (R-Pa.) had withdrawn his name from consideration to be the nation’s drug czar following revelations about his past policies toward the pharmaceutical industry.

Marino’s withdrawal comes just a day after Trump said he would “look at” the congressman’s nomination after it was discovered that he supported legislation that weakened federal agents ability to go after pharmaceutical companies.

“Rep.Tom Marino has informed me that he is withdrawing his name from consideration as drug czar. Tom is a fine man and a great Congressman!” Trump said in a tweet.

Rep.Tom Marino has informed me that he is withdrawing his name from consideration as drug czar. Tom is a fine man and a great Congressman!

Marino would have been the director of the Office of National Drug Control Policy. Trump’s admission that he would “look at” Marino’s nomination on Monday came after a joint investigation by 60 Minutes and the Washington Post found that the Republican congressman supported legislation passed last year that weakened the government’s ability to freeze shipments of drugs that were suspicious.

Marino received nearly $100,000 in campaign contributions from political action committees supporting the legislation, according to the Post.

The pharmaceutical industry has been scrutinized in recent years as the nation reels from an opioid epidemic.

On Monday, Sen. Joe Manchin (D-W.V.) called on Trump to withdraw Marino’s nomination, saying that his congressional colleague did not “fully understand the scope and devastation of this epidemic or ties to industry overrode those concerns.” Manchin, whose state has been among the hardest hit by the opioid epidemic, said Marino was “unfit” for the position.

You can read the Washington Post and 60 Minutes investigation here.