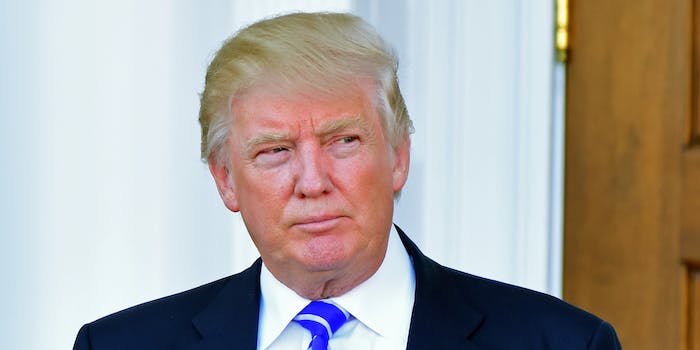 During an address at the National Prayer Breakfast on Thursday morning, President Donald Trump said he wants to “totally destroy” the law that prohibits tax-exempt religious organizations from engaging in political speech.

“Freedom of religion is a sacred right, and it’s under serious threat,” he said. “I will get rid of and totally destroy the Johnson Amendment and allow our representatives of faith to speak freely and without fear of retribution.”

Upending the Johnson Amendment would require the approval of Congress, an enormous step. The Johnson Amendment was introduced in 1954 by then-Sen. Lyndon Johnson, from whom it takes its name. It prohibits churches and other religious institutions from making political endorsements at the threat of losing their tax-exempt status.

In his speech, however, the president did not make mention of any draft ‘Religious Freedom’ executive order. But after it had been reportedly circulating among White House officials, it was leaked and published in full on Wednesday evening.

The order, fully titled “Establishing a Government-Wide Initiative to Respect Religious Freedom,” was obtained by both The Investigative Fund and The Nation.

The leaked order exposes government plans to offer increased protections to individuals and organizations based on religious freedom of conscience.

Critics fear that the order could legalize widespread discrimination, primarily stemming from its incredibly broad and questionable definition of what constitutes a religious organization.

The draft’s protections apply to “any organization, including closely held for-profit corporations, operated for a religious purpose, even if its purpose is not exclusively religious.”

”Persons and organizations do not forfeit their religious freedom when providing social services, education, or healthcare; earning a living, seeking a job, or employing others; receiving government grants or contracts: or otherwise participating in the marketplace, the public square, or interfacing with Federal, State or local governments,” the draft goes on to say of those protections.

Effectively any organization or business falling within the broad definition could hold an official company stance on, for example, same-sex marriage or abortion. Critics claim that by citing religious conscience and protections, organizations and businesses could choose to refuse service to gay customers or discriminate based on gender identity when employing workers.

To uphold its proposals, the draft executive order recommends the establishment of a dedicated “working group” within the Department of Justice to investigate cases where religious freedom is impeded.

The White House has not officially acknowledged the leaked executive order and may not act upon it in its current format.

You can read the full document here.