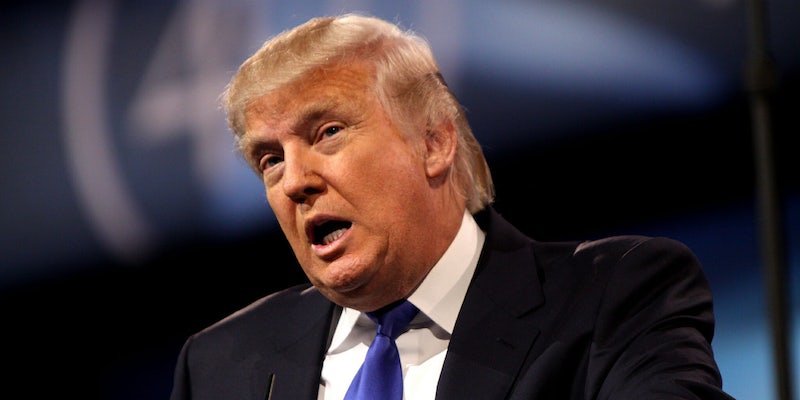 But fans are still invited for 'a different type of ceremony.'

President Donald Trump on Monday withdrew an invitation for the Philadelphia Eagles to visit the White House, citing the continuing disagreement over whether NFL players should be required to stand for the national anthem.

The team, which championed the Super Bowl LII, was originally slated to visit the White House on Tuesday. But multiple players said they wouldn’t participate in the visit for political reasons, and fewer than 10 members of the team were expected to be present.

The Philadelphia Eagles are unable to come to the White House with their full team to be celebrated tomorrow. They disagree with their President because he insists that they proudly stand for the National Anthem, hand on heart, in honor of the great men and women of our military and the people of our country. The Eagles wanted to send a smaller delegation, but the 1,000 fans planning to attend the event deserve better.

These fans are still invited to the White House to be part of a different type of ceremony—one that will honor our great country, pay tribute to the heroes who fight to protect it, and loudly and proudly play the National Anthem. I will be there at 3:00 p.m. with the United States Marine Band and the United States Army Chorus to celebrate America.

Although many NFL players kneeled during “The Star-Spangled Banner” to protest police brutality and oppression of people of color last football season, Philadelphia players did not. Some did raise their fists in solidarity with the protests instead.

Even after the NFL announced a new policy that will require players to either stand or stay in the locker room during the anthem, Trump continued to bash players who wouldn’t stand and suggested they “shouldn’t be in the country.”

Last year, Trump withdrew an invitation to the Golden State Warriors after star player Stephen Curry said he was disinterested in meeting with the president.

Update 5:29pm CT, June 5: This article has been updated to accurately reflect that Philadelphia Eagles players did not kneel in protest during the national anthem last football season.