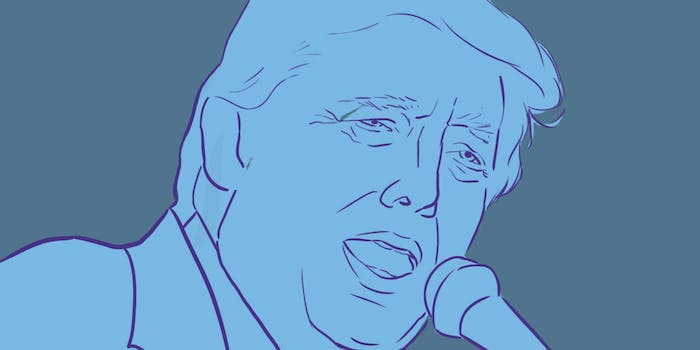 On Sunday afternoon, the 2016 Republican presidential frontrunner tweeted the following graphic, which claims that police and white people rarely kill African-Americans, but that African-Americans kill each other and white Americans at a staggering rate.

Tensions with black Americans has been a recent hallmark of Trump’s campaign. On Saturday, a black protester was beaten by white Trump supporters at a Birmingham, Alabama rally for the real estate mogul. Trump said Sunday morning that “maybe [the protester] should have been roughed up, because it was absolutely disgusting what he was doing.”

There are numerous reasons to doubt Trump’s graphic.

First, it purports to show U.S. crime statistics for 2015, though law enforcement agencies tend to wait until a year is over before announcing an annual crime breakdown. It’s unclear exactly what his source, “Crime Statistics Bureau – San Francisco,” is meant to be. You won’t find any organization by that name through Google. And while the San Francisco Police Department does indeed release annual crime statistics, they’re only current as of the end of 2014 and aren’t broken down by race anyway.

A Google image search finds no instances of the graphic before Sunday, indicating it’s a recent creation, though the accompanying “gangster” figure has existed for years and is a recurring image on some 4chan boards.

According to Little Green Footballs, however, the image may have originated from a neo-Nazi Twitter account, which shared the image on Saturday.

Even if Trump (or whoever created the infographic) did have a source for those statistics, it’s unlikely that they’re accurate. The Federal Bureau of Investigation does release annual crime statistics, and while, again, they’re only current as of 2014, Trump’s stats are wildly divergent from the FBI’s numbers, which are relatively consistent from year to year.

Is possible that the tweet, which was posted around 3pm ET on Sunday, came from an intern or other Trump staffer? Maybe, but that may be unlikely.

Trump’s Twitter account is extremely active. While politicians will frequently explain away gaffes by saying they don’t often man their own accounts, Trump claimed Thursday in an interview with Business Insider that when it comes to Twitter, during off hours, “I do it myself,” and during busy work hours, “ I’ll call the girl, and she tweets it.”