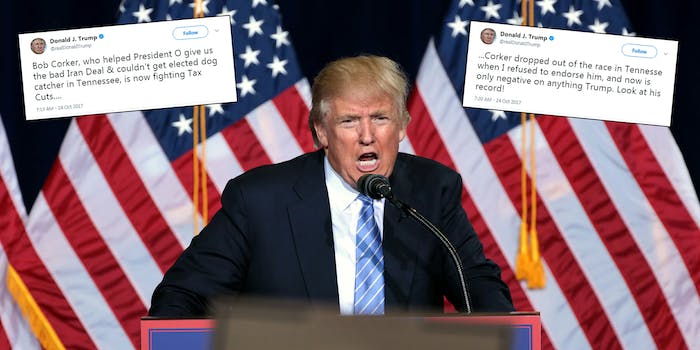 His war of words against the senator continued on Tuesday.

Trump and Corker have been embroiled in a public spat for weeks. Corker, who announced he is not seeking reelection in 2018, is one of several congressional Republicans who have been critical of the president. The two got into a Twitter war earlier this month after Trump said the senator “begged” him to endorse him.

“Bob Corker, who helped President O give us the bad Iran Deal & couldn’t get elected dog catcher in Tennessee, is now fighting Tax Cuts….” Trump said, later adding: “…Corker dropped out of the race in Tennesse [sic] when I refused to endorse him, and now is only negative on anything Trump. Look at his record!”

…Corker dropped out of the race in Tennesse when I refused to endorse him, and now is only negative on anything Trump. Look at his record!

Despite Trump’s claim that Corker “couldn’t get elected dog catcher in Tennessee,” he has, in fact, won multiple elections in the states, serving as mayor of Chattanooga from 2001 to 2005 and United States senator for the state from 2006 to present, having won reelection in 2012.

While it isn’t immediately clear what prompted Trump’s latest Twitter barb, it’s likely that he was responding to an interview Corker gave with Good Morning America on Tuesday morning where the senator defended his comments earlier this month where he said it was a “shame” that the White House “has become an adult daycare center.”

Corker also was critical of Trump’s handling of foreign relations, particularly the long-standing issue of North Korea and his relationship with Secretary of State Rex Tillerson.

“The president undermines our secretary of state [and] raises tensions in the area by virtue of the tweets that he sends out,” Corker said. “I would just like for him to leave it to the professionals for a while and see if we can do something that’s constructive for our country, the region, and the world.”

Corker responded to Trump’s latest tweets with a tweet of his own, calling him an “utterly untruthful president.”

Trump’s latest Twitter attack follows a string of insults the president has lobbed at the retiring senator. Earlier this month, Trump went on a tweetstorm where he said Corker “begged” him for an endorsement and wanted to be the president’s secretary of state. The president also accused Corker of being “largely responsible” for the so-called Iran Deal.

Trump seemed to like his Twitter insults, as he liked several of his own tweets, an action that is considered quite gauche.

Update 9:55am CT, Oct. 24: Trump and Corker continued their attacks against each other following Tuesday morning’s original tweets. The president criticized Corker’s work as chairman of the Senate Foreign Relations Committee and repeated his derisive nickname for the senator, “liddle’ Corker.”

Sen. Corker is the incompetent head of the Foreign Relations Committee, & look how poorly the U.S. has done. He doesn't have a clue as…..

…the entire World WAS laughing and taking advantage of us. People like liddle' Bob Corker have set the U.S. way back. Now we move forward!

Corker, meanwhile, told CNN that Trump lied in his attacks on him. “Nothing he said in his tweets today were true,” Corker said. He added that the president debases the country through his behavior.

“I don’t know why he lowers himself to such a low, low standard,” Corker said, later adding, “I think the debasement of our nation is what he’ll be remembered the most for, and that’s regretful.”