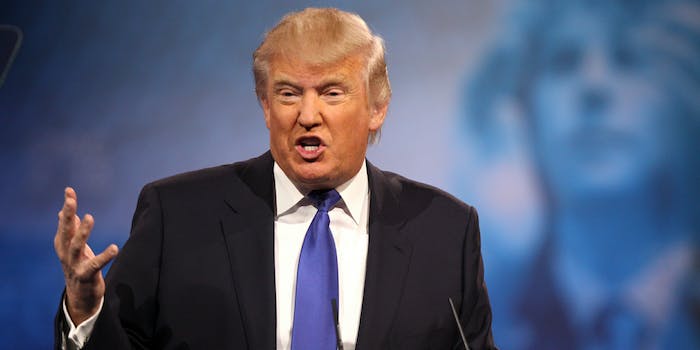 Trump went on a Twitter rant on Thursday afternoon—off his normal early morning schedule—where he brought back his favorite nickname for Democratic Presidential candidate Hillary Clinton.

Before that, Trump seemed to question why Clinton wasn’t being investigated for ties to Russia—despite the fact that U.S. intelligence agencies concluded that the country interfered in the election with the goal of helping Trump win.

“Why is that Hillary Clintons family and Dems dealings with Russia are not looked at, but my non-dealings are?” Trump tweeted.

Why is that Hillary Clintons family and Dems dealings with Russia are not looked at, but my non-dealings are?

While there were reports that an aide of Clinton’s destroyed phones, and former President Bill Clinton met with former Attorney General Loretta Lynch, Trump is missing a major point: Clinton is not the president of the United States (he won, as he likes to point out with print outs of electoral college maps) and is not a sitting president involved in a growing probe into Russian ties with a presidential campaign—one that includes five separate investigations—and facing possible obstruction of justice charges, as Trump reportedly is.

The FBI also spent more than a year investigation Clinton and her use of a private email system before clearing her. Not to mention that Trump and several of his surrogates have complained that people can’t seem to let the election go.

Trump’s tweets questioning why Clinton isn’t subject to a Russia-related investigation seems to take a major leap in logic: Is he suggesting that Clinton was involved in a Russian scheme to make her lose the election?

Alas, it appears Trump believes he’s being treated unfairly—that Clinton should have been prosecuted while he’s innocent, at least by comparison.