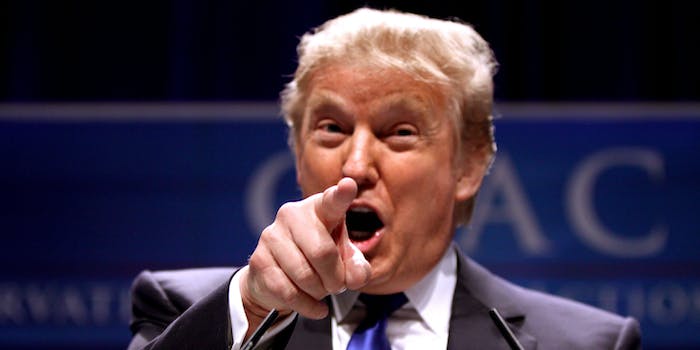 President Donald Trump hit back at Hillary Clinton in a series of late-night tweets on Tuesday, after the former Democratic presidential nominee blamed her 2016 election loss on Russian interference and a letter released by FBI Director James Comey.

Appearing at the Women for Women International Conference in New York that evening Clinton explained that while she ran a far from “perfect campaign,” responsibility for her loss laid in large part elsewhere.

“If the election had been on Oct. 27, I would be your president,” Clinton said. “…I was on the way to winning until a combination of Jim Comey’s letter on October 28 and Russian WikiLeaks raised doubts in the minds of people who were inclined to vote for me but got scared off. And the evidence for that intervening event is, I think, compelling, persuasive.”

Trump, however, was quick to react and claimed that Comey, his own current FBI director, had worked to help Clinton during the election.

The pair have been sparring on various occasions over the election outcome. Trump even handing out printed maps of 2016 voting results to the reporters during an interview last week.

Comey’s letter to members of Congress said that the Bureau had happened upon a batch of Clinton’s emails, during an “unrelated” investigation into disgraced politician Anthony Weiner, that may be relevant to the separate and closed investigation into the private email system Clinton used during her time as secretary of state.

It was released less than two weeks ahead of election day and triggered wide speculation that the FBI had reopened its investigation into Clinton’s private email server. The incorrect assessment was first publicly tweeted by Rep. Jason Chaffetz (R-Utah), a House Republican still investigating Clinton’s role in the Benghazi attack.

FBI Dir just informed me, "The FBI has learned of the existence of emails that appear to be pertinent to the investigation." Case reopened

Within hours the falsehood had been carried across the internet by politicians and media outlets alike, despite caution by some journalists.

Back in December, FiveThirtyEight pollster Nate Silver came to the same conclusion voiced Tuesday by Clinton and suggested that the belief that the FBI had reopened the investigation dealt immeasurable damage to the Clinton campaign.

I'll put it like this: Clinton would almost certainly be President-elect if the election had been held on Oct. 27 (day before Comey letter).

Meanwhile, Comey is set to appear on Wednesday before the Senate Judiciary Committee to give testimony on Russian interference in last year’s election, as well as his decision to issue the letter so close to voting day.