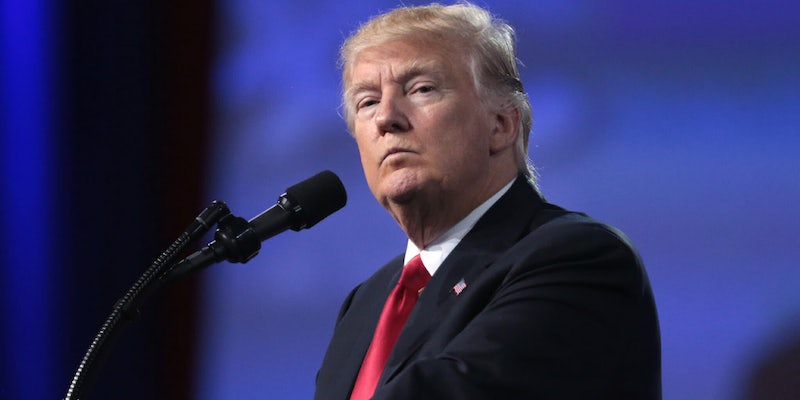 Trump is not happy the media is receiving false information.

With the White House’s unexpected firing of FBI Director James Comey, there’s been a swirl of differing accounts from Trump administration officials.

The initial story given was that Comey was fired for the way he handled the investigation into Hillary Clinton‘s use of private email for official state department business, a story that was backed up when Deputy Press Secretary Sarah Huckabee Sanders told reporters this week that Comey committed “atrocities” as part of the probe.

On Thursday, President Donald Trump himself disputed that, saying explicitly to NBC’s Lester Holt that he fired Comey over the Russia investigation.

The administration also pushed the narrative that many in the FBI supported the firing, which acting FBI Director Andrew McCabe disagreed with in testimony before the Senate Intelligence Committee on Thursday.

That did not stop Sanders from continuing to push the narrative that “rank and file” FBI employees had lost confidence in Comey, leading to an extremely contentious White House briefing on Thursday, where reporters grilled Sanders for evidence supporting the claim, which she struggled to provide.

The president on Friday morning addressed his administration’s contradictions, saying on Twitter that since his deputies he has tasked with informing the press can’t provide accurate information, maybe the administration shouldn’t have briefings at all.

As a very active President with lots of things happening, it is not possible for my surrogates to stand at podium with perfect accuracy!….

…Maybe the best thing to do would be to cancel all future "press briefings" and hand out written responses for the sake of accuracy???

While that would prevent Trump’s surrogates from misstating things in response to probing questions, if the president goes on national TV and contradicts whatever they’ve been informed about, no amount of writing things down will prevent mixed messaging.

Again, the story that there was collusion between the Russians & Trump campaign was fabricated by Dems as an excuse for losing the election.