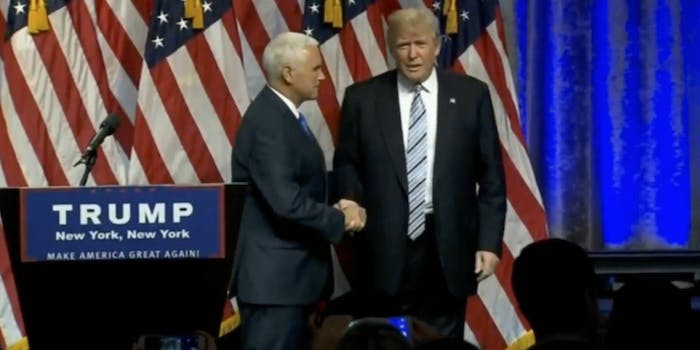 Donald Trump officially made Indiana Governor Mike Pence his running mate on Saturday morning, in a delayed announcement in the wake of one global tragedy and an attempted coup in Turkey.

“Indiana governor Mike Pence was my first choice,” said Trump from a press conference room in the New York Hilton Midtown. “I admire the work that he has done, especially in the state of Indiana.”

Trump pointed to Indiana’s falling unemployment rate under Pence’s governorship as a primary reason for his choice. The rate of unemployment in Indiana was more than nine percent when Pence took office in 2013. It is now slightly more than five percent. It’s worth noting that Indiana’s improved job numbers weren’t just a gubernatorial phenomenon but felt nationwide; the national unemployment rate fell from eight percent to 5.4 during the same time.

With the exception of Vermont, all states are legally required to balance their budgets according to the National Conference of State Legislatures.

Trump also compared Pence with Democratic presidential candidate Hillary Clinton, calling her a “weak candidate” that refused to name Islamic terrorism as the cause behind a year of mass killings carried out in San Bernardino, Orlando, France, and other locations worldwide. He referred to the recently dropped Benghazi criminal probe as Clinton “getting away with murder.”

“Mike Pence will never be afraid to speak the name of our enemy: radical Islam. Radical Islamic terrorism,” said Trump.

Trump almost backed out of picking Pence, reported Politico, NBC News, and other outlets. Pence said on stage Saturday that he got the call from Trump to be his VP pick last Wednesday. According to NBC News, Trump got cold feet the very next day. The real estate mogul was making calls to friends and advisors on Thursday night and said he felt “backed into a corner” with his pick. Trump preferred former House Speaker Newt Gingrich and New Jersey Gov. Chris Christie, but felt that Pence would be easier to manage and lacked the baggage of other candidates.

The timing seemed far too coincidental when Trump delayed his Friday in-person announcement of his VP pick, citing Thursday evening’s attack in Nice, France. Trump then opted to make the VP announcement on Twitter later on Friday afternoon anyway.

The widely-mocked Trump-Pence 2016 logo was nowhere to be found on Donald Trump’s campaign website on Saturday morning. The internet was quick to point out the logo’s less than subtle sexual subtext, which may have influenced its disappearance.

Breaking the mattress of America. pic.twitter.com/M4Cq62YS2c

“Donald Trump is a good man and he will make a great president of the United States of America. Donald Trump understands the frustrations and the hopes of the American people like no American leader since Ronald Reagan,” said Pence.

Pence, an evangelical Christian, alienated some in his faith when he watered down a religious freedom measure in Indiana by axing language that critics said would have discriminated against LGBT people.

“Christian evangelicals, in particular, were disheartened that Pence threw them under the bus. The irony is that, as Trump’s vice presidential pick, some of those evangelicals most critical of Pence at the time will now come out and say how awesome he is. But during that fight there was real bitterness in the evangelical community that Pence clearly did not have the courage of his convictions,” wrote conservative columnist Erick Erickson in a recent column.

In perhaps a bid to appeal to evangelical Christians as well as the GOP itself, Trump announced he would repeal the Johnson amendment if elected president. Under the 1954 law, it is illegal for tax-exempt groups, including religious organizations, to support political candidates.

This year’s Republican Party platform includes a repeal of the Johnson amendment. Religious liberties groups, including evangelical Christians, have argued that the law prevents them from having a political voice.