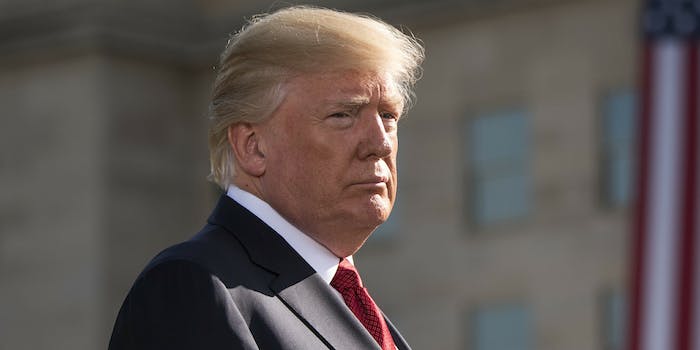 A day after threatening to pull relief efforts from Puerto Rico, President Donald Trump on Friday morning changed his tone in addressing the United States territory as it continues to suffer the effects of a devastating hurricane.

“The wonderful people of Puerto Rico, with their unmatched spirit, know how bad things were before the [hurricanes],” Trump tweeted. “I will always be with them!”

The wonderful people of Puerto Rico, with their unmatched spirit, know how bad things were before the H's. I will always be with them!

The tweet is a clear departure from Trump’s statements on Thursday and an apparent effort to regain the appearance of compassion for the U.S. citizens of Puerto Rico as officials continue to criticize his response to the ongoing devastation. The new messaging also follows a vote in the House of Representatives approving a nearly $5 billion loan program to help Puerto Rico restore “basic functions.”

More than three weeks after Hurricane Maria made landfall on Puerto Rico, 91 percent of citizens remain without electricity, 37 percent lack access to running water, and telecommunications services are out for nearly half the country, according to Puerto Rico’s government.

In a series of tweets Thursday morning, Trump condemned Puerto Rico’s financial woes and said federal relief efforts could not remain in the island territory “forever.”

"Puerto Rico survived the Hurricanes, now a financial crisis looms largely of their own making." says Sharyl Attkisson. A total lack of…..

…accountability say the Governor. Electric and all infrastructure was disaster before hurricanes. Congress to decide how much to spend….

This sentiment stands in stark contrast to the president’s comments regarding Texas after it suffered devastating floods following Hurricane Irma.

Following Trump’s Thursday tweets, San Juan Mayor Carmen Yulín Cruz—who has clashed with Trump since the immediate aftermath of Hurricane Maria—pleaded with the president in an open letter to not pull federal relief efforts out of the territory.

“I ask every American that has love, and not hate in their hearts, to stand with Puerto Rico and let this President know we WILL NOT BE LEFT TO DIE,” Cruz wrote. “I ask the United Nations, UNICEF and the world to stand with the people of Puerto Rico and stop the genocide that will result from the lack of appropriate action of a President that just does not get it because he has been incapable of looking in our eyes and seeing the pride that burns fiercely in our hearts and souls.”