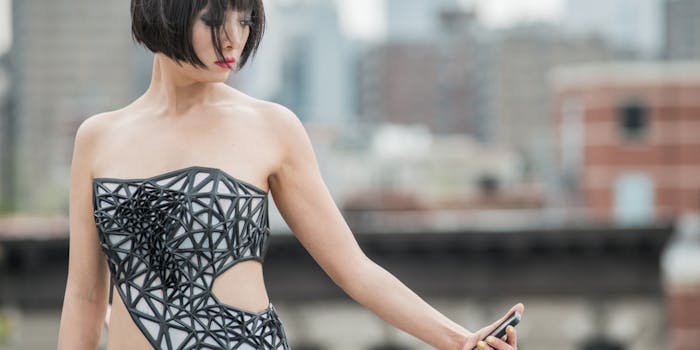 Meet the interactive dress that turns transparent when you tweet

I see London, I see France. I see this lady's underpants.

Most of us already know that to a certain extent, we’re completely naked and exposed on the Internet, allowing companies like Google and Facebook to access our personal data on a daily basis. Two NYU designers, however, have created a physical manifestation of that queasy, naked-in-public feeling you get when you see a targeted ad on Facebook based on a clandestine Google search for a skin rash: a smartphone-powered dress that becomes transparent when you tweet.

Created by Xuedi Che and Pedro Oliveira of NYU’s Interactive Telecommunications Program (ITP), x.pose is a “wearable, data-driven sculpture” made of flexible, 3D-printed mesh and a layer of reactive displays which are controlled via Arduino. The dress is divided into sections, with each section corresponding to whatever neighborhood the wearer is tweeting or posting to Facebook from.

But Che and Oliveira’s creation is a lot less prurient—and a lot more overtly political. With the tagline, “In the digital realm, we are naked all the time,” x.pose is a reflection of the idea that while we wouldn’t be caught dead naked in public, we not only allow ourselves to be naked in cyberspace, we enthusiastically consent to it.

“Individuals carrying smartphones and connecting with services such as Google or Facebook have agreed, often without conscious consideration, to policies that grant these service providers explicit rights to harvest and utilize personal data on a massive scale,” the inventors explain on the x.pose website.

“We have already ceded control of our digital data emissions, x.pose goes a step further to broadcast the wearer’s data for anyone and everyone to see.”