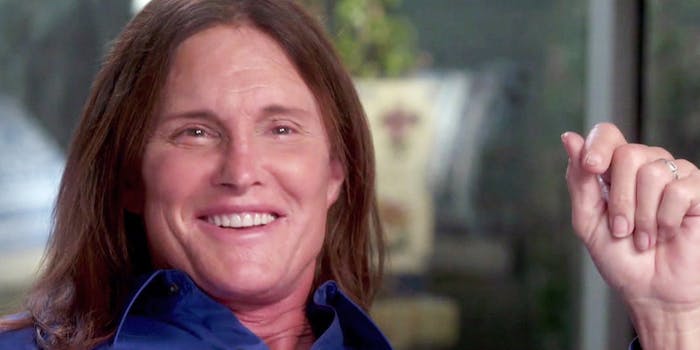 The truth about transgender Republicans

Last week, Bruce Jenner came out as both transgender and Republican. The latter revelation was far more shocking.

Last Friday evening, 17 million people tuned into ABC for a special two-hour long episode of 20/20 where Diane Sawyer interviewed former Olympic gold medalist and reality TV star Bruce Jenner. While the night’s major revelation was that Bruce Jenner officially came out as a transgender woman, many focused on another biographical tidbit from the interview that they found far more shocking: Bruce Jenner, a transgender woman, is also a Republican. (A GLAAD press release has stated that Jenner “has not requested that a new name or pronoun be used,” so we’ll be using “he/him” in accordance with his wishes.)

Jenner made this admission when Sawyer asked him how he’d felt when he heard President Obama mention transgender people in the State of the Union Speech, the first president to ever do that. While Jenner gave the President credit for the milestone, he then said that he didn’t want to “get political” about Obama: “I’ve just never been a big fan. I’m kind of more on the conservative side.” When Sawyer asked if Jenner was a Republican, he smiled and said, “Yeah, is that a bad thing? I believe in the Constitution.”

News that Jenner was a Republican sent waves throughout the LGBT blogosphere, begging the question: Why did so many people find it more shocking that Jenner identifies as a Republican—a trait he shares with 25 percent of American voters—than the fact that he identifies as a trans woman? Well, it probably has something to do with the fact that usually, when the words “Republican” and “transgender” are together, it’s in a sentence like “Republican lawmaker proposes transgender bathroom bill,” or “Republicans in legislature oppose transgender inclusive non-discrimination ordinance.”

When you consider that more than 75 percent of trans people identify as something other than heterosexual and that trans people are four times more likely to make less than $10,000 a year than cis people, the Democratic party seems to be a much more attractive option to transgender people. But we should also remember that in addition to being a trans woman, Bruce Jenner is white, a Christian, 65 years old, and very, very rich—traits that are traditionally associated with the target demographic for the GOP.

Despite the widespread panic, confusion and sometimes even anger that people felt about this announcement, Jenner is far from the first Republican transgender celebrity. In fact, several trans people have even run for office, including Lauren Scott, who ran for Nevada state legislature in 2014. Most say the same thing: They’re transgender, but that’s not all they are, and trans issues aren’t the only issues they care about.

Most transgender Republicans say the same thing: They’re transgender, but that’s not all they are, and trans issues aren’t the only issues they care about.

After Scott won her Republican Primary, she said that “one of the big reasons for why I won was [that] I was talking about things other than LGBT issues; I was talking about the fiscal and tax issues the Republicans want to hear about.” She also explained why she left the Democratic party for the Republican one, saying that as a trans Democrat, she always felt pandered to. “Like the Republicans with the Tea Party, you find a group you can make promises to, and then once you’re in you pass policies that are more in line with your party and not really in line with the people who elected you,” she said.

Another recent trans candidate, Donna Milo, ran as a Tea Party Republican in her 2010 Florida State Congressional run, finishing with 22 percent of the Republican primary vote. Milo told the Sun-Sentinel that conservative trans people ”tend to be more quiet because there is an expectation that you are going to be liberal. But just because you are somewhat socially open-minded doesn’t mean that you’re not fiscally conservative, a strong Christian, and believe in a strong foreign policy.”

Milo also told the paper that her gender has nothing to do with her politics. “As a Cuban-born American and having lost my country to socialism, the parallels that I see, the divisiveness, the over-regulation, the transfer of wealth…to the government” informed and shaped her conservative political values.

Even one of the most influential trans women in America leans Republican. When Jennifer Pritzker came out in 2013, she became the first—so far, the only—openly transgender billionaire. She’s also a retired lieutenant colonel in the U.S. Army and is very active in philanthropy involving the military.

It’s these ties to the U.S. military that inform her political affiliations. It’s also why she’s donated large amounts of money to the NRA and Republican candidates, including John McCain and Mitt Romney. She also donated $1.35 million to launch a study of the effect on transgender soldiers serving in the military, demonstrating that the Left doesn’t have a monopoly on trans issues.

Rebecca Hargate, a trans blogger and coder who has self-identified as Republican for much of her life, says she still holds many conservative values, including advocating for “relatively small government” that stays “out of people’s lives.” She said that growing up, she was influenced by Republican politicians and Alex P. Keaton from Family Ties. She also turned to the GOP for a father figure to replace the one who left her when she was just 5 years old. “That’s where Reagan came in,” she told me. “People like Limbaugh, and later Newt Gingrich, only served to enforce what he was saying…I saw them as rebels against the baby-boom establishment my parents were a part of.”

Hargate says that when she tells people she’s a Republican, she gets a lot of mixed reactions. “If it’s at a support group full of transgender people, many will offer me a sympathetic hug,” she says. She was also surprised to discover that when she talked with a trans friend about her political beliefs, they found common ground. She told me on individual issues, we were very close. She just tended to sit on the other side of the fence.”

Overall, Hargate says that while she enjoyed the Jenner interview, she wasn’t totally surprised by his admission that he self-identified as Republican. “Jenner has had to hide themselves behind the facade of an ultra male athletic persona in the public eye,” she says, using gender-neutral pronouns to describe Jenner. “So the revelation that they consider themselves a Republican didn’t totally come out of left field.”

Hargate says she officially stopped identifying as a Republican in 2012, because she didn’t like to see the Religious Right have so much influence in the party. She wonders if Jenner will eventually change too. “It will be interesting to see how things evolve in Jenner’s mind in reference to their political affiliation.”