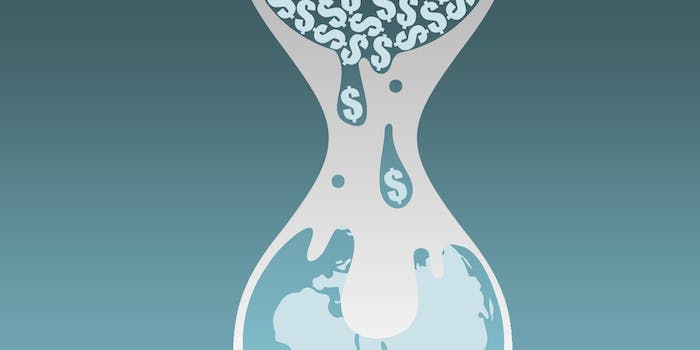 Critics of deal say it could cost taxpayers billions.

Get ready for a heavy dose of Boring But Important. We’ll wait for you to get settled. Ready? Alright, let’s go.

A leaked chapter of a controversial international trade accord reveals provisions that would allow foreign corporations to sue the United States government over domestic policies that undermine their profits.

Under the investment chapter of the Trans-Pacific Partnership (TPP), leaked on Wednesday by WikiLeaks, foreign companies are empowered to challenge U.S. laws, regulations, and court rulings in international tribunals, a course critics believe will inevitably cost American taxpayers billions of dollars.

Corporations may be granted through “Investor-State Dispute Settlement” (ISDS) tribunals the authority to demand taxpayer compensation for domestic energy, health, environment, land use, and other policies. With the exception of Australia, all of the countries involved in the TPP talks have agreed to submit to the jurisdiction of ISDS tribunals.

WikiLeaks previously published leaked chapters of TPP, the full text of which is not available to the public, concerning intellectual property rights and the environment. Internet freedom advocates have long asserted that the copyright-protection provisions in TPP could hamper rights online.

“The TPP has developed in secret an unaccountable supranational court for multinationals to sue states,” WikiLeaks founder Julian Assange said in statement. “This system is a challenge to parliamentary and judicial sovereignty. Similar tribunals have already been shown to chill the adoption of sane environmental protection, public health and public transport policies.”

The United States Trade Representative’s Office has dismissed concerns over investment chapter, according to the New York Times, arguing that critics are “using hypothetical cases to stroke irrational fear.” The United States is already party to 51 trade agreements, including the North American Free Trade Agreement (NAFTA), which is subject to extrajudicial tribunals.

Critics, however, argue that the TPP would greatly expand ISDS cases because the accord includes wealthy countries, such as Japan, who can afford to go toe-to-toe with the U.S. government in court.

Consumer advocacy group Public Citizen, which offered an in-depth analysis of the investment chapter, criticized the ISDS process for subverting transparency and lacking the safeguards and due process common to partner-nations’ domestic legal systems. Of chief concern is that the tribunals would be staffed by private sector lawyers “unaccountable to any electorate, system of precedent or substantive appeal.”

“What could be the justification for foreign investors to pursue claims against a nation outside of that nation’s judicial system? The track record of ISDS cases reveals a clear answer: to try to obtain greater rights than those provided under national law and through domestic courts,” Public Citizen said in a statement.

The U.S. and 11 other Pacific nations are still negotiating the TPP’s final text, though news sources indicate that an agreement may be close to completion. However, the Obama administration is facing resistance in Congress to renewing the crucial Trade Promotion Authority (TPA), better known as “Fast Track,” which would allow the president to speed the TPP through Congress by limiting discussion, prohibiting amendments, and subjecting it to a simple up-or-down vote.

Numerous activist and civil liberties organizations are opposed to the TPA’s passage due to the lack of public oversight in the trade talks. Even as hundreds of corporate advisors were given access to the negotiating texts, for a time, even members of Congress weren’t permitted to view them. Input from public advocacy groups and others who might be critical of the deal have been excluded since day one.

U.S. Trade Representative Michael Froman urged lawmakers on Thursday to quickly pass the TPA. The trade negotiations could be concluded, he said, within a “a very small number of months.”

“We are encouraging Democrats and Republicans to work together to reach agreement on a bill that can get bipartisan support and to move that ahead in parallel as soon as possible,” Froman said.