Anonymity is headed straight for the mainstream.

In the wake of the Edward Snowden leaks, one of the biggest intelligence blows in American history, it’s tempting to say that online anonymity is finally having its moment. After all, the Tor anonymity network is bigger than ever, with 2 million users at any given moment and over 150 million downloads in the last year.

In fact, this is more than a moment. Online anonymity has been growing rapidly for nearly five years straight. Tor, the most popular anonymizer, has been growing exponentially since 2010, with more bandwidth being added on, more users joining the fray, and performance improving steadily all along, according to a new research paper from hacker Virgil Griffith. 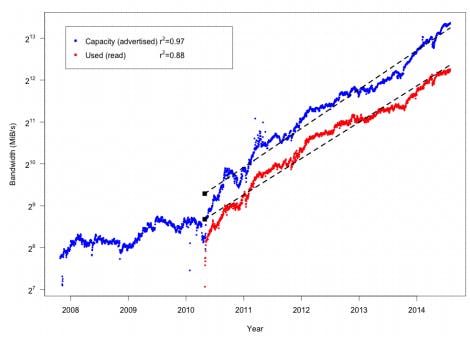 The big caveat to this study is Tor’s performance. Users have enjoyed steadily advancing speeds, but the rate of improvement is much slower. Network performance (known as Torperf) when handling large files only doubles at a rate of once every 20 years, according to Griffith, which is positively lethargic compared to the rest of Tor’s growth. 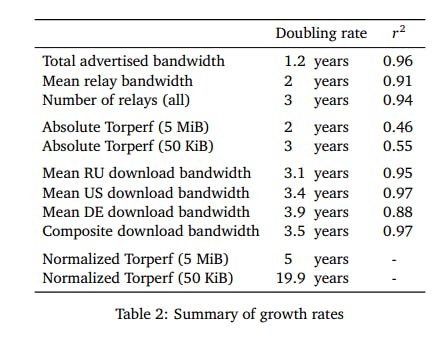 Tor developers have been presented with numerous solutions to the speed performance problem, including offering financial incentives to volunteer bandwidth to improve the network’s perfromance.

To put it all into perspective, Tor currently has 6,500 nodes making up the network’s crucial infrastructure, meaning it’s on pace to hit 13,000 in 2016. That would mean the potential ability to serve more Tor users faster, making it easier for anyone to use.

Of course, past performance is not necessarily indicative of future results, but all the signs look good for continued growth.

“They will have to top out eventually (speed of light limits, etc), but there’s every indication these trends will hold for at least the next 5-10 years,” Griffith predicts.

If Tor is added on to Firefox, for instance—as Mozilla and Tor employees have discussed about in the past—these numbers could grow even faster.