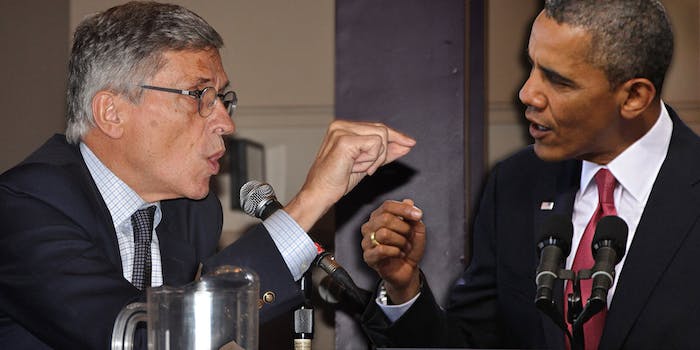 The chance that President Obama‘s call to preserve net neutrality by reclassifying the Internet as a public utility will accomplish anything just got even slimmer.

According to the Washington Post, Federal Communications Commission chair Tom Wheeler, the man with the most power in what’s become an increasingly political tug of war over the Internet, privately told several tech giants Monday that he did not plan to accept Obama’s proposal.

Wheeler reiterated his previous opinion that he preferred trying to figure out a sort of “hybrid” proposal to both attempt to keep net neutrality activists and Internet providers happy, though open Internet proponents have been highly critical of that approach, the Post reported.

Marvin Ammori, a lawyer who specializes in technological issues, including net neutrality (and whose work has appeared in the Daily Dot before), was present in that meeting, and disagreed with a characterization of Wheeler that painted him as openly bandying for his hybrid proposal.

“Generally, he was trying to justify delaying the decision,” Ammori told the Daily Dot, “not clearly bucking Obama. Nonetheless, delaying seems to be a stall tactic, and you would never stall and would completely decide the issue by Dec. 11 if you agreed with the president.”

In the end, though, the takeaway is basically the same: Wheeler certainly appears unhappy with the president’s plan. That’s a real shame for open Internet advocates, who almost unanimously support Obama’s desire to codify the principle that Internet providers can’t charge extra to visit particular sites at full speed.

Wheeler, it’s worth noting, is a former cable lobbyist, but also was directly appointed by Obama himself in 2013. On Monday, Obama put forth by far his strongest call for full net neutrality, a multimedia campaign asking Wheeler to use so-called Title II legislation to classify the Internet as a public utility, like electricity. Wheeler was glib in his public response to Obama’s comments, indicating the President’s comments were of equal importance to the nearly four million who wrote to the FCC in 2014 to ask for net neutrality.

The FCC didn’t immediately return the Daily Dot’s request for comment on Wheeler’s remarks. It did, however, confirm Tuesday that contrary to Wheeler’s earlier plan to settle the open Internet issue by the end of the year, the agency decided after Obama’s remarks that it would wait until at least 2015 to make a decision.

Update 10am ET, Nov. 14: An FCC official tells the Daily Dot that the decision to delay the new net neutrality rules was merely to ensure that they can firmly withstand a legal challenge from Internet service providers. Further, the official said, Wheeler’s statments at the meeting were taken out of context, and did not signify a break with President Obama.