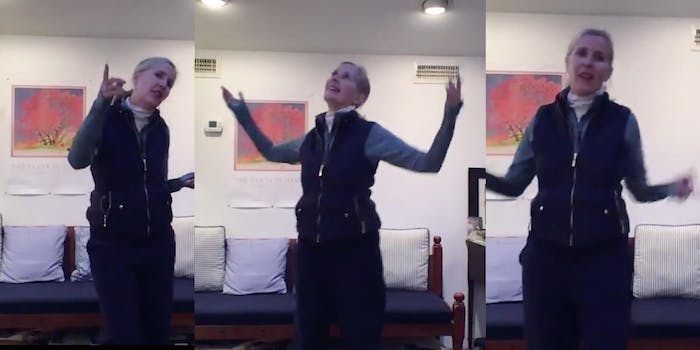 Some students are coming to her defense.

After New York University Tisch School of the Arts students demanded to be reimbursed for tuition, NBC New York reported that dean Allyson Green responded with a video of herself dancing to “Losing My Religion.”

However, some students have said that there is more to the story. It is not as simple as the dean replying “no” and attaching the video.

While the video was attached to the end of the email, the email itself was thorough and “thoughtful” and ended with an explanation of the song’s significance to the dean, who said it was important to her during the AIDS crisis of the 1980s.

“So we’ve all established that the tisch dean dancing video is yikes, but if there’s anybody who hasn’t seen the actual email and would be interested in looking at it and tackling that as well— makes for a more well-rounded argument imo— here it is,” wrote Twitter user @totebagratdog, an NYU playwriting student.

It’s not just students coming to Green’s defense. Other readers of the email, which has been shared online, are criticizing media coverage of the situation, describing it as surface level and inaccurate. Some have gone so far as to praise Green for her response.

“Dance videos are always cringey,” Twitter user @im_PULSE wrote. “But the Tisch dean didn’t send one as a response to students’ complaint. As a matter of fact, she responded to the complaint reasonably, patiently & substantively. At the end of her response, she also wrote a long exhortation to help the vulnerable, to protect each other, and to be mindful of stress.”

Despite its context, the video has drawn comparisons to actress Gal Gadot’s “Imagine” video in levels of tone-deafness.

In a statement, Green said her intention was to inspire Tisch students, not insult them.

“What I meant to demonstrate is my certainty that even with the unprecedented hardships of social distancing and remotely-held classes, it is still possible for the Tisch community to make art together, and that all the artists in our school will find ways to remain closely connected even as circumstances challenge us.”