What analyzing 150 Tinder swipes can tell you

I joined Tinder around August last year, and within a couple of months, I started to notice a pattern — certain names featured more frequently than others.

Me being me, I wanted to find out.

The first thing I’d have to do was record some data. And so I did. I sat with Excel open, Tinder on the go, and made a note of a girl’s name, her age and whether I swiped her right or left.

I took a sample of 150. I realise that with a sample size like this, we won’t ever be highly accurate or representative of the (Tinder) public at large, but it’s better than none.

The most frequent girl names

The 10 most popular girls names, their frequency and percentage chance of me swiping right were:

Given the low sample sizes of each girls’ name, the percentages won’t be that representative, but certainly there’s some interesting patterns emerge already.

Last month, I was discussing the initial data collection with a few friends. After the expected amusement that I’d done it full-stop, they asked how many people I swiped right to.

“About one in five,” I said. To be more accurate I should have said 23 percent.

Yet that figure didn’t seem to reflect my recent Tinder experiences. It seemed far too high. So I knew I’d have to collect some data again.

At the start of May, I collected another 150 sample in the same age bracket as I used before. 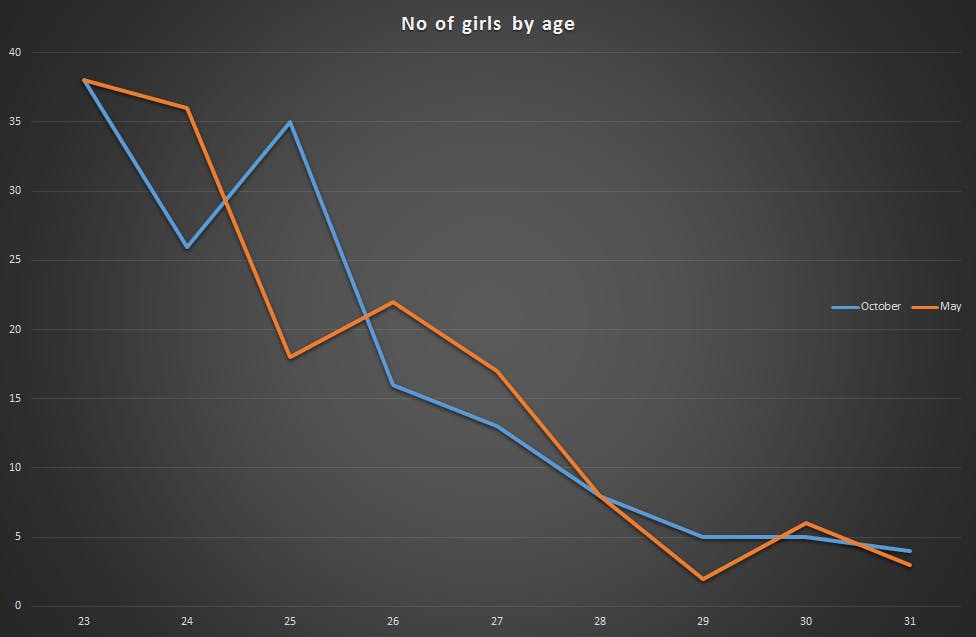 The first thing to notice is that the number of 25 year olds has almost halved.

Around three-quarters of users I’ve encountered are between 23 and 26 (within my search criteria). 25 year olds had a higher representation in November compared to now, but the number of 24 and 26 year olds has increased and evened out that mid-twenties age bracket. 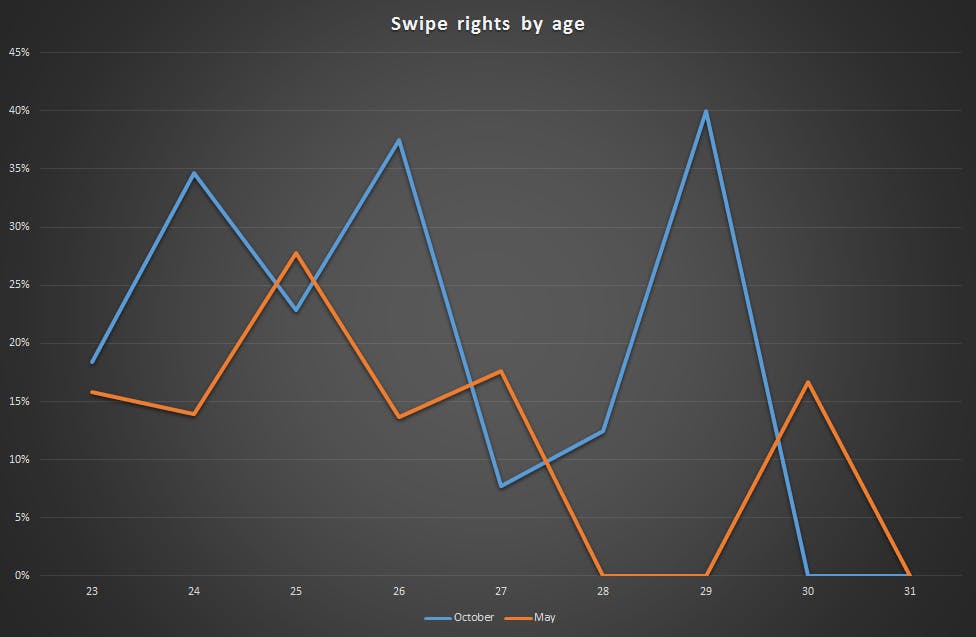 While there’s fewer 25 year olds, the likelihood of me swiping right has increased by about 20 percent. The opposite is true for the new higher percentage of 24 and 26 year olds. While there’s now more of them on Tinder, I’m half as likely to swipe them right as I was back in October.

But the big drop-off has been in volume of swipe rights.

The big dropoff, as I expected, has been in total volume of swipe rights, which has dropped from 23 percent to 15 percent (just 23 of my 150 sample).

The average age of girls in my samples has increased from 24 to 25, while the mode remains 23.

As for the names, there’s more diversity now. Whereas there were six Laurens, four Annas and four Hannahs in October, no name appeared more than three times this time around.

And compared to last year, the top 10 now is quite different:

Lauren, Sarah, Charlotte, and Rachael/Rachel are the only names that appear in both lists.

The Laurens, Sarahs, and Rach(a)els were all between 24 and 26 (with one exception), meaning they were born between 1986-1990. I couldn’t find popular baby names for either of those years, but according to this site, and Sarah, Charlotte and Lauren appear in one of the lists either side of that period.

While my sample sizes were small, there’s a few conclusions and insights I’m beginning to draw:

When I started on Tinder, having a very small age bracket (24-26) ended up with very few women. Now that there’s a much higher volume on it, I feel I can reduce that. Considering that the mean age is 23 and yet I’m only 16 percent likely to swipe right, I should drop that age.

Likewise, I only swiped one person right over the age of 27. (And even 27 year olds are only getting swiped right 17 percent of the time). So with that in mind, will likely switch the bracket to 24-27 or potentially 26.

My sample size will ultimately reduce the ability to draw highly accurate conclusions from the data, but there’s still some interesting things I’ve found.

In some instances, I can judge a girl’s attractiveness according to their name

Obviously what you might want to call your child is determined by the type of person you are, interests, taste, culture etc. That influence will be passed onto the child and change how they put themselves across. Therefore it makes sense that you could draw parallels based on a name.

But the one stat that really stands out is that if you’re an early adopter, I’m 53 percent more likely to find you attractive.

This post originally appeared on Medium and has been republished with the author’s permission. Joshua Lachkovic is the Editor and Founder of the London New Journal and you can find him on Twitter here.