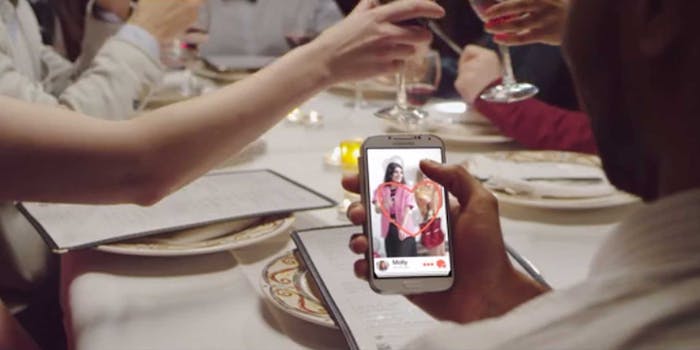 The Tinder lawsuit means damage for more than the company

Women don’t feel safe on the Internet, and the people who claim to be building things to make them feel safer should be extending that behavior into the real world.

Tinder is burning. The company behind the hottest hookup app on smartphones today has found itself engulfed by a lawsuit and accusations of sexual harassment and blatant sexism. Company CEO Sean Rad and cofounder Justin Mateen are the two primary targets of the suit, levied by former VP of Marketing Whitney Wolfe.

It appears to be a classic case of a work relationship gone sour, with a little bit of obsessive creepiness and misogyny to boot: To put it bluntly, Wolfe and Mateen dated briefly while both were working for Tinder and when Wolfe broke it off, Mateen… completely lost it. Not just regular “bad breakup” lost it, but stalker style lost it—threatening people she talked to and verbally abusing her along the way. He threatened to fire her if she were to date another man, and literally dared her to publicly accuse him of harassment.

Since the suit was filed, Rad has addressed the drama via an internal email that was obtained by TechCrunch. In it, the CEO claims that the complain “is full of factual inaccuracies and omissions,” and that Tinder “did not discriminate against Whitney because of her age or gender.”

Mateen has been suspended from his position by Tinder’s owner, IAC, for an undetermined amount of time. But while Tinder prepares its defense, there are some damning text messages between Mateen and Wolfe that have surfaced.

The texts, which have been entered into evidence, are now public and they show just how bad things were for Wolfe as she attempted to go about her day-to-day life with her former boyfriend and direct supervisor assaulting her via texts. Wolfe alleges that her cofounder status was yanked due to the fact that she is a woman, and that Tinder CEO Sean Rad pushed for her to resign—which Wolfe initially accepted—once Mateen’s abuse became too much for her to bear.

Stories about women being mistreated in the workplace are unfortunately common, but what makes this situation particularly terrible is that Tinder is an app that claims to make dating better for women, to give them more control.

While the app is a massive success among young singles of both sexes, it’s been hailed as the app that “solved online dating for women.” Mateen and Rad have said all the right things about women—at least while promoting Tinder. .

In speaking with Slate months before the current fallout, Mateen spoke about Tinder appealing to women, saying that it doesn’t “discriminate against anyone,” and the app “just allows you to be you.”

Privately, Mateen’s opinion of women appears to be very different. As Wolfe’s suit alleges, Matten told the female co-founder that she wouldn’t be included in business articles about the company because doing so “makes the company look like it was an accident,” and referred to one of Wolfe’s female friends as a “liberal lying desperate slut.”

“I enjoy meeting new people and I have certainly had my fair share of fun, but at the end of the day I like being in a relationship,” Mateen claimed in an interview. His text messages to Wolfe suggest a slightly more complicated personality. “Yes if I can not get along with you and it starts to effect my work too much […] the effect will be that ur gone,” one rant starts. “You always knew that,” he continues, “And if you threaten me I will bark back like a psycho so u should know better.” 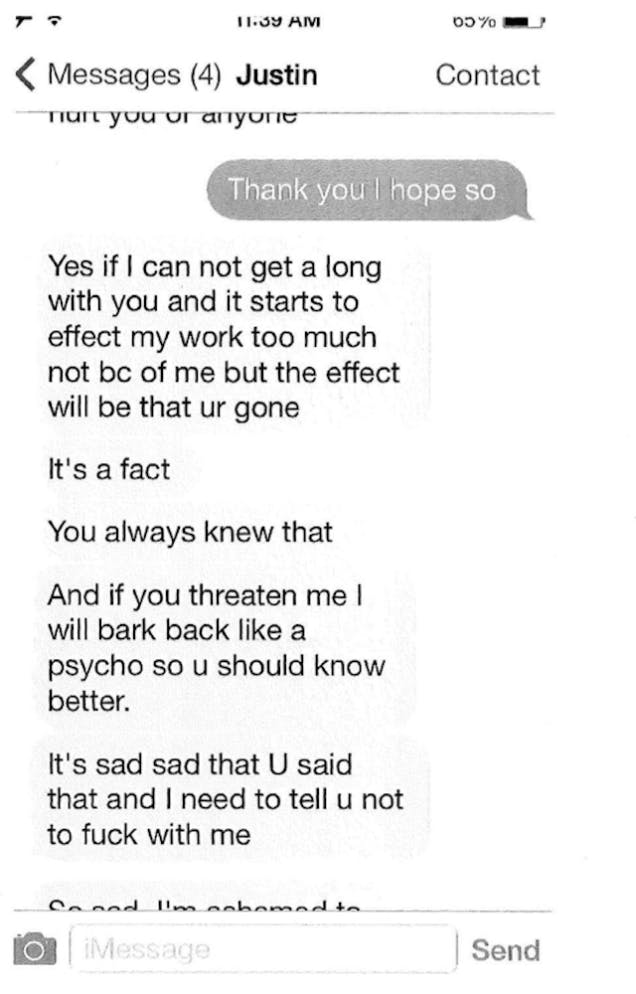 If the suit is indeed an accurate account of how the saga unfolded, Rad’s actions—or lack thereof—are easily as condemnable as those of Mateen. He played the “bro” card to its fullest,  and not only sided with a guy who was acting like a scorned 16-year-old on prom night, but told Wolfe that it was her job to “keep Justin calm.”

Unfortunately, the effects of these incidents reach farther than just Tinder, and it’s yet another fantastic example of why women in tech are most definitely not being treated as equals in many instances.

It’s entirely disgusting, and not just because macho sexism seems to be an inescapable part of startup culture, but that it’s gotten so bad that a woman was initially willing to sacrifice her own career to stop the abuse, rather than disturb the bro-lationship strengthening within Tinder’s walls.

And it’s disheartening—no, damaging—that an app that wants to improve a situation generally difficult and unpleasant for woman is run by people who say and do the things we’re learning that these cofounders (allegedly) said and did. Women don’t feel safe on the Internet, and the people who claim to be building things to make them feel safer should be extending that behavior into the real world.