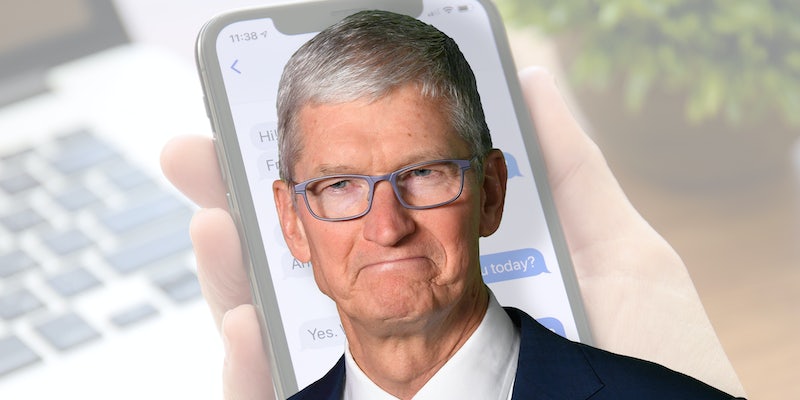 Apple CEO Tim Cook told a reporter to buy his mom a new iPhone after the reporter complained about being unable to send videos to his mother.

The comment was made at the 2022 Code Conference, according to the Verge, after a journalist asked Cook how Apple could improve communication between iPhone and Android users. Cook said that he didn’t feel Apple users were “asking that we put a lot of energy into that.” After the reporter said he couldn’t send certain videos to his mom because she had an Android, Cook joked “buy your mom an iPhone.”

The Apple versus Android debate has been raging for years, with proponents landing on both sides of the green/blue bubble debate. As it stands, iPhones have seamless communication with each other, but struggle when communicating with Android operating services, changing the color of Android texts.

The debate is more than aesthetic: Apple uses end-to-end encryption on iMessages and messages are sent via the internet, while SMS is what Android uses. SMS, or Short Message Service, is a somewhat outdated form of communication, originally developed in 1986. Android companies have tried to make the case for Apple to add its iMessage to Android for years. Just last month Google launched a campaign aimed at shaming Apple into adopting RCS, a successor to SMS that could see iPhone to Android communication modernize.

Regardless of the debate, users on Twitter were upset by Cook’s notion to simply buy an iPhone.

“It’s clear why Apple is opposing interoperability,” Hiroshi Lockheimer, a Google senior vice president, wrote. “But people should be able to send high-quality videos and photos to their mom without having to buy her a new phone.”

“I can afford Apple, but this kind of dismissive arrogance makes me never want their products,” another user wrote.

“‘Buy your mom an iPhone’ is one of the most elitist, dismissive, tone deaf responses to a user problem I’ve ever seen,” another wrote. “From the CEO no less! Do better for your users.”