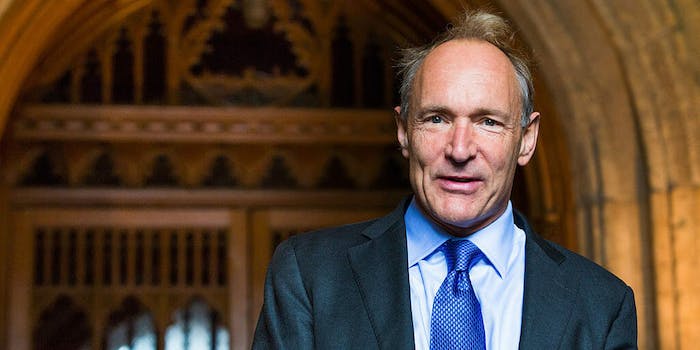 What if data actually belonged to you, and not giant internet corporations?

Twenty-eight years ago, Tim Berners-Lee created the technology that formed the backbone of the internet. Today, the technologist earned another accolade, the Turing Award. However, just because Berners-Lee is being honored for his life achievements doesn’t mean he’s done quite yet.

Working with the Decentralized Information Group at MIT’s Laboratory for Computer Science and Artificial Intelligence, Berners-Lee is trying to reverse the current state of the web for a better internet. Today, Wired explains, we give huge corporations such as Google, Facebook, and Netflix control over what you see, and access to your private data. Berners-Lee wants to change that through an open-source project and web standard called Solid.

Overhauling the way the internet works sounds like a tall order, but for Americans, news of Solid comes at a pivotal time. President Trump just signed legislation into effect that allows internet service providers (ISPs) to gather and profit from customers’ personal and financial information. For those who want to keep their data private, you can use a VPN and other services, but that’s more of a band-aid than a successful long-term solution, however.

By restructuring the way we think of data, how it’s accessed, and where it’s stored, however, we could have a better internet that does allow for true data privacy.

It starts by standardizing how data is stored and accessed. Rather than your Facebook data living on Facebook, and your financial data split among different banks and financial apps, it would be more like the olden days of the floppy disk era. Specific data would be stored on specific servers, either locally or with the companies of your choosing. (The key here is that you are in control of where that data lives.)

With everything following this same Solid standard, you could then choose where your social media data is stored or your financial data. The apps you use for social networking or mobile finance (or healthcare, productivity, etc.) could then access and write to those data stores as needed. Unlike today, the data wouldn’t actually belong to those companies, though. It would belong to you.

It took time for the internet to evolve into its current state, so it’s possible that it could eventually evolve into Berners-Lee’s vision. With today’s political climate, though, it’ll be up to us to champion these kinds of changes.