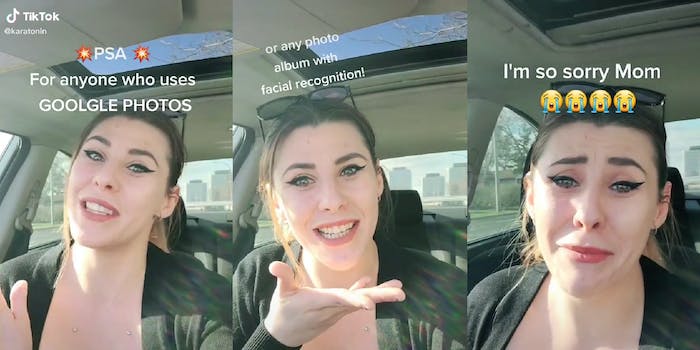 Facial recognition on photo-sharing apps can be a blessing and a curse. Just take it from the TikToker who unwittingly shared an X-rated video with her mother with the help of Google Photos.

TikToker @karatonin shared her mortifying story last week in a video that has been viewed more than 2.8 million times.

“This is a PSA for anybody who uses Google Photos or any photo app that has facial recognition,” she says. “If you are my son watching this, keep scrolling now. Do not watch this video.” (“Who am I fucking kidding, you’re gonna watch it anyways, but I warned you,” she then mutters.)

@karatonin then gives a brief explanation of how Google Photos works for the uninitiated. If you type in a person’s name into Google Photos, its facial recognition software will pull up every photo including that person. @karatonin used that feature to create a photo album of her son and share it with her mother, so every time she takes a new photo of her son, it will update her mother.

“Isn’t technology incredible?” she says. “A little too fucking incredible if you ask me.”

@karatonin’s photo album of her son was working as planned until one day, she decided to post something a little more risqué.

“So a little while back, I decided I wanted to spice things up a little bit in my relationship,” she says. “And I made a rated-R video where I was doing unspeakable, ungodly things. And Google Photos picked up a very small picture of my son in the background on my fridge and said, ‘Hey, that’s a picture of Josh. Let’s send this video to Kara’s mom.’”

“I’m so sorry, mom,” @karatonin says gravely at the end of the video.

Viewers sympathized with and cringed alongside @karatonin in the comments of her viral TikTok.

“That would be my 13th reason,” @nothxbrit wrote.

“You were just showing your mom that you were trying to have another kid,” @_leonita37 commented.

TikTok user @ubergoober85 made a salient point: “well, ur son probably learned to scroll the next time u say so.”