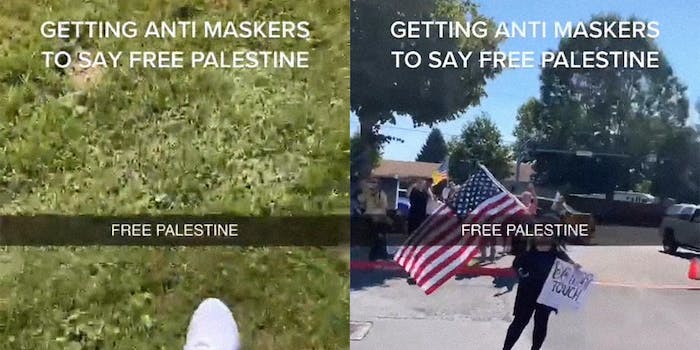 A TikToker tricked a group of anti-mask protesters into saying “Free Palestine” by telling them his friend “Palestine” got kicked out of school for not wearing a face mask.

The 13-second video shows TikTok user @calvin approaching a group of protesters waving American flags and signs and telling them, “My friend Palestine got kicked out of school for not wearing a mask. Can you say ‘Free Palestine?'”

In the video, the protesters take the bait and begin chanting “Free Palestine” along with Calvin, which was probably his comedic intent since anti-mask sentiment is typically connected with the right, which is typically also tied to support for Israel’s continued dominion over Palestinians. By tricking the anti-maskers into chanting “Free Palestine,” Calvin is making them denounce their presumed beliefs.

The video has amassed over 657,000 likes since its posting on Sept. 3, and many of the 3,803 comments recognize humor in Calvin’s prank.

“Tell me you don’t understand the Middle East without telling me,” a third, @Benrrrr, said.

The Daily Dot has reached out to @c7lvin.