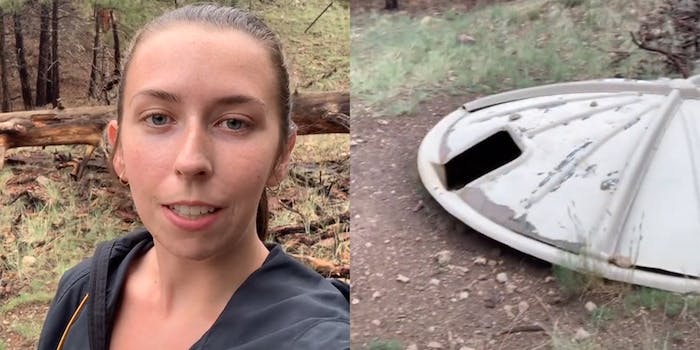 Some people see it.

TikToker @allymurray222 caught the attention of conspiracy theory TikTok when she posted about a “UFO” she found in her backyard. Now, some people claim to have seen a blinking eye inside it.

In the video, Ally stands in the middle of a forest, which is part of her backyard. She says it extends for miles, which is why she’s only just found the UFO, which seems to have been there a while. It’s invited conspiracy theorists on TikTok to help her identify what it is. The look is distinctly like a UFO from a children’s cartoon. It’s the classic broader in the middle disc, all in a shade of greyish beige. But it’s also small enough that aliens would have to be only a few inches tall to fit inside it. Even the hatches look like what you’d expect from a classic aliens-come-to-earth movie.

In a second video, Ally clarifies that the object is surrounded by nothing but trees for a mile on all sides and that it’s attached to the ground. Despite its supposed isolation, at least one person had already found it and painted a mushroom on the side.

Ally also showed her viewers the inside of the object, filled with rocks and water and a mystery hole on one side that she asks viewers to help her identify. Her theory on the object was that it was a bunker of some kind, but viewers have also suggested the top of a silo or water tower, a closed-up mine, an old satellite dish, and even the prop from a movie.

One commenter claimed to know exactly what it was: a fake UFO made from two satellites welded together. Apparently, she knows several people who make them and leave them around in order to “mess with people”.

By the third video, however, things started to get a little strange(r) as some people claimed to see a blinking eye under the hole that Ally points to with a stick.

The Daily Dot has reached out to Ally and will update if she responds.