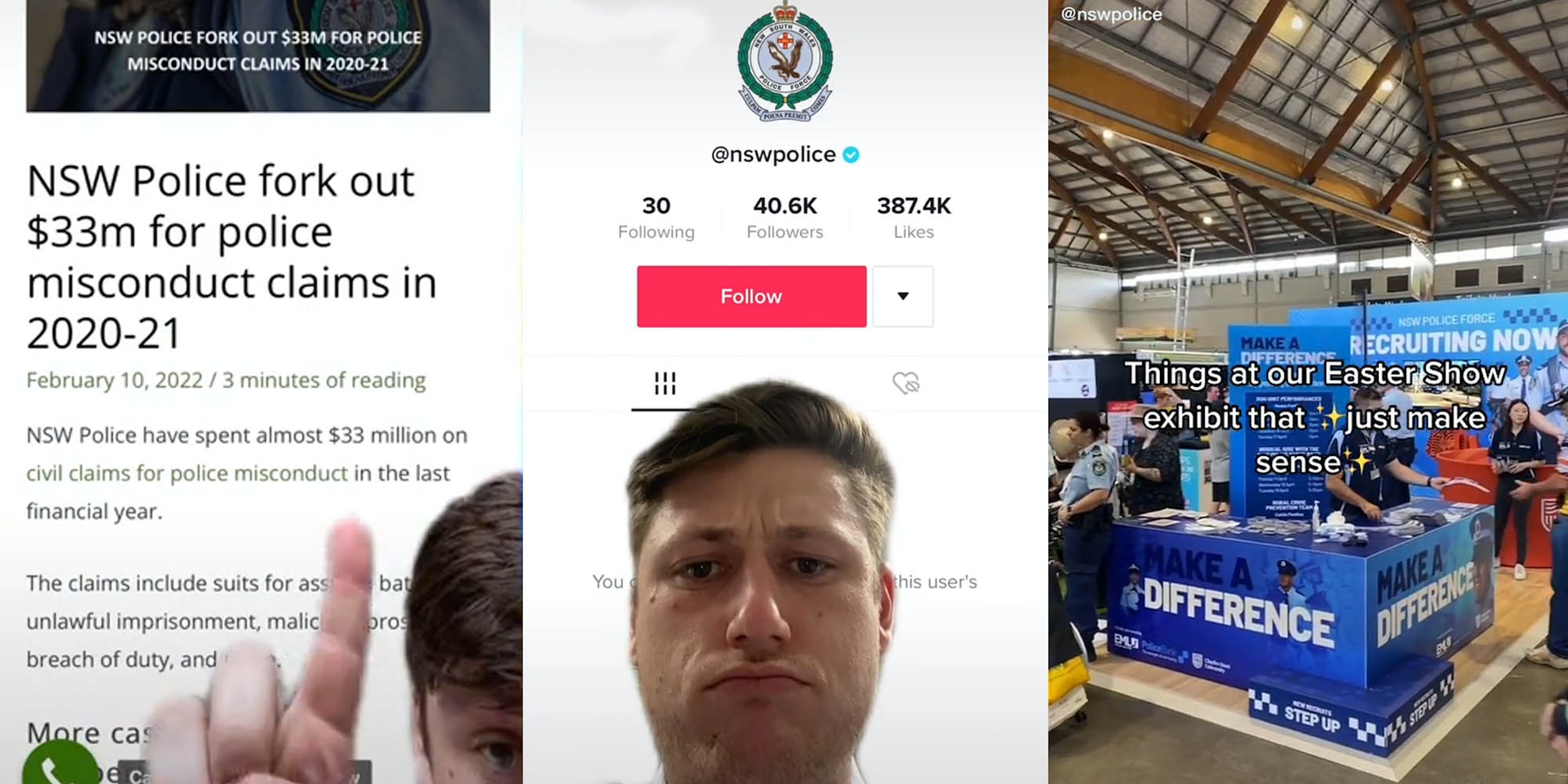 Police block TikToker after he stitches their copaganda posts with articles about brutality, misconduct

The cops appeared to have a thin skin.

The New South Wales Police’s official TikTok account blocked an Australian user who was using the social media platform to hold it accountable.

Ben Vance, a 26-year-old digital marketer based in Wollongong, a city an hour south from Sydney—the capital of New South Wales—stitched several videos posted by the @nswpolice official account. The videos by the cops are meant to be funny and endearing, but Vance contrasted them directly with statistics and articles about law enforcement misconduct in the state.

Just like many companies, institutions or even governments, law enforcement agencies around the world use social networks to project an aura of likability and approachability. That social media represent a powerful tool for police was already clear ten years ago, when European Union-funded research showed that digital platforms can be used to “leverage the wisdom of the crowd,” “show the human side of policing,” push information, and extend community policing to the digital realm.

It was a matter of time, then, before police swarmed to TikTok, which has become the world’s most used site over the past two years. The Albany Police Department, in New York, for instance, famously amassed over 720,000 followers on TikTok by having their agents take part in popular memes and dances.

The police department in Anniston, Alabama, perfected a sketch where Chief Nick Bowles bickers with a younger officer, playing their generational divide for laughs. Meanwhile, the FBI has apparently been advising local law enforcement in the U.S. to turn to the app to “humanize the badge” and perform community outreach.

Being on social media, though, also means exposing yourself to criticism. And, when you’re an institution as controversial as law enforcement, which maintains the monopoly on state-sanctioned violence, criticism abounds.

One of such critics is Vance, who used TikTok’s “stitch” feature to pair several videos from the New South Wales police’s official TikTok account with screenshots of articles on police misconduct in the Australian state. Vance had been mostly consuming content passively on TikTok since the COVID-19 pandemic began in early 2020. He hadn’t been posting much until, in late April, he stumbled upon his state’s police force’s account.

In his first post replying to the police, Vance—whose handle on the app is @easymoneyvancey—stitched a video where an officer joked about taking a long time to open a TikTok account with an article from the Guardian titled “NSW police strip-searched 96 children in past year, some as young as 11.”

“I have no hatred or detest for the police,” Vance told the Daily Dot. “But they do a job that we need. I just feel they have systemic issues that have massive consequences for Australian society, and these issue aren’t really publicized. So I guess I just took it straight to them. I think the issue really is much the same as it is in the United States: the police police themselves. Which isn’t right, as a state-funded organization.”

The Australian user found a way to bring his concerns directly to the police, confronting them publicly about the cases of systemic violence they have been involved in.

In another instance, he stitched a video where two police agents shared the story of someone who has been using their phone while driving without a license and in an unregistered vehicle with another Guardian article headlined: “NSW policeman touched Aboriginal boy’s nipple while laughing with officers, watchdog finds.”

Other articles he shared as a stitch with @nswpolice discussed deaths in custody, misconduct claims, and several instances where officers convicted of domestic violence were allowed to keep their jobs in the force.

But after just five videos, the official @nswpolice account blocked him on TikTok without ever interacting with him. Stitches are also turned off for all of their videos. Several have taken notice, leaving comments like “you’d rather just silence ppl than address issues” and “turn the stitches back on mate” on their videos.

The New South Wales police did not reply to the Daily Dot’s request for comment.

Vance’s video where he shows he got blocked by @nswpolice has so far been viewed by 123,000 people, getting mixed reactions. “I have noticed a few people defending the police,” he says. “I did receive two death threats from anonymous users, but that’s all part of the social media experience these days. The reaction I got from the police—blocking and hiding direct propositions instead of tackling them face on—was interesting. There was a chance to have an open and honest conversation about the issues I raised in my videos. I would actually welcome that.”

The discussion over whether public officials and institutional accounts should be allowed to block users on social media has developed over the past few years, as digital spaces take up an increasingly prominent role in political communication. In the U.S., a court ruled that politicians can’t block critics on Facebook back in 2019. Australians have also held a debate as several politicians have proved to be pretty block-happy. But there have not been any rulings or laws to address the phenomenon so far.

The reaction by police didn’t shock him, Vance says, “but I did expect some dialogue from them questioning why I did it, or at least asking me to remove to videos instead of just hiding their profile from me and turning off their stitches and duets.”

But ever since it blocked @easymoneyvancey, the NSW police has not been posting on TikTok, meaning his campaign against copaganda may have put a stop to some of it.