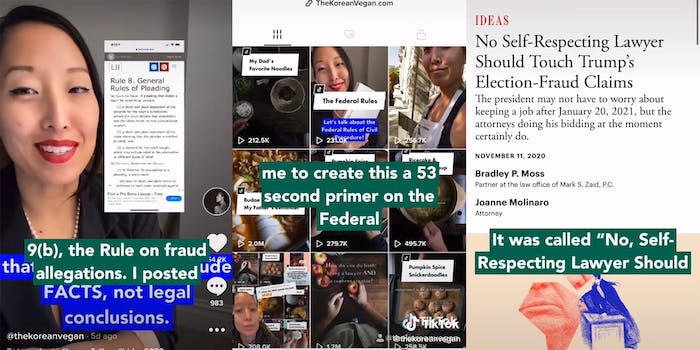 MAGA trolls: Next time, don’t signal-boost somebody who’s way smarter than you.

Positive, systemic change happens slowly; it’s often difficult to pinpoint the exact time at which that change occurs and who the people responsible for it are. But last week, a TikTok-famous attorney convincingly argued that the Trump supporters trolling her on social media directly set a course for the president’s election fraud lawyers to resign.

Joanne L. Molinaro, who posts popular social content across platforms as @thekoreanvegan, uploaded a viral TikTok last Saturday that broke down the roles she and several Trump supporters played in his lawyers’ resignations. It all started when Molinaro posted an Instagram video on Nov. 7 celebrating President-elect Joe Biden’s electoral victory. Several Trump supporters trolled her post with run-of-the-mill comments such as, “Enjoy the celebration while it lasts because this projection will surely get reversed when it goes to the Supreme Court.”

Those Trump supporters were perhaps unaware that they were picking a fight with a trial lawyer who specializes in fraud. Their comments inspired Molinaro to create a TikTok primer on the Federal Rules of Civil Procedure. In particular, she highlighted Rule 9(b), which states, “In alleging fraud or mistake, a party must state with particularity the circumstances constituting fraud or mistake.” In other words, Trump’s lawyers should have had specific evidence to back up the president’s baseless voter fraud allegations, which thus far have collapsed under the remotest scrutiny in court.

Molinaro’s TikTok primer went viral across platforms, earning over 1 million views and a retweet from Lincoln Project cofounder George Conway. She was then invited to co-write an op-ed for the Atlantic titled “No Self-Respecting Lawyer Should Touch Trump’s Election-Fraud Claims.” The article elaborates on the stipulations of Rule 9(b), along with Rule 3.1, which stipulates that “a lawyer shall not bring an action unless a basis exists in law and fact for doing so,” and Rule 11(b), which requires all claims to be “warranted by existing law or by a non frivolous argument.”

Based on the Federal Rules of Civil Procedure, Molinaro argued, “The deeper [Trump’s lawyers] venture down the Trump conspiracy rabbit hole, armed with nothing more than futile lawsuits premised on flimsy evidentiary or legal bases, the more their professional reputations and law licenses are at risk.”

In short, the pro-Trump trolls talking out of their asses on Molinaro’s social media posts prompted her to lay down some cold, hard facts about the Federal Rules of Civil Procedure. She believes that her viral videos and writings served as a wake-up call to the lawyers working with Trump, who resigned out of fear for their professional reputations and their future careers.

A word to the wise for MAGA trolls: Next time, maybe don’t signal-boost somebody who’s exponentially smarter and more popular than you.