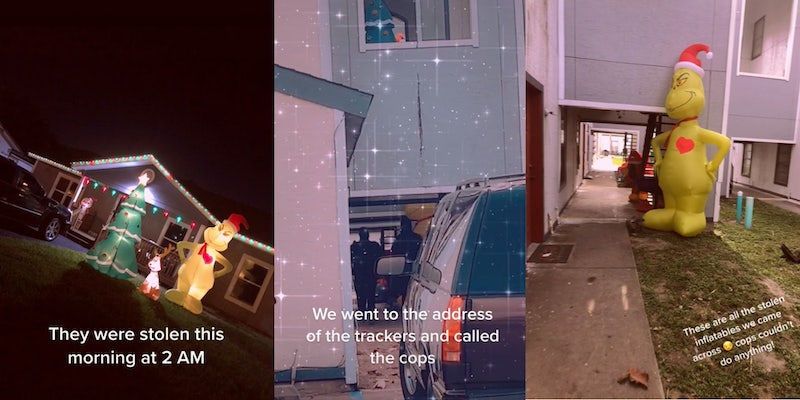 'First mistake was calling the police. Just pull up and get your belongings.'

A TikTok user has gone viral after using Apple Airtags to track down their stolen inflatable Christmas decorations.

The video, which has been viewed more than 7.2 million times since being posted on Tuesday, begins with TikTok user @latoxicanys noting that she had placed tracking devices on her decorations after a neighbor’s were stolen.

“Putting these bad boys on my Christmas inflatables because my neighbors were stolen over the weekend,” she writes.

Surveillance footage, which features an inflatable Christmas tree as well as the Grinch and his dog Max, shows how the items disappeared from the TikTok user’s front yard at around 2am.

The TikTok user says that AirTags led her to an apartment complex where her decorations were seen sitting outside along with numerous others. Police were reportedly called to the scene, although @latoxicanys claims that they were unable to help after none of the occupants answered their doors.

Many users in the comments argued that @latoxicanys shouldn’t have called the police to begin with.

“First mistake was calling the police,” @veronicuhh.95 wrote. “Just pull up and get your belongings.”

Others were shocked that such an item would be stolen during Christmas time.

In a follow-up video that has garnered more than 685,000 views, the TikTok user showed her followers the moment that the decorations were stolen on camera.

Commenters continued to express their desire that @latoxicanys would ultimately be able to take back her items.

“Next video I wanna see you taking your stuff back,” @pinkbarbie2221 wrote.

Sure enough, @latoxicanys’s followers would have their Christmas wish granted on Tuesday.

In a third video on the saga, @latoxicanys showed the inflatables back at her home.

“Update. Grinch is back. Put trackers on yalls [sic] inflatables,” she wrote.

When asked in the comments how she was able to get the items back, @latoxicanys seemingly alleged that the thieves had returned them voluntarily.

“Long story short… they realized there was too much heat on them because of the tik tok and I made a Fb post,” she said. “Got scared.”

The Daily Dot reached out to @latoxicanys for comment but did not receive a reply by press time.