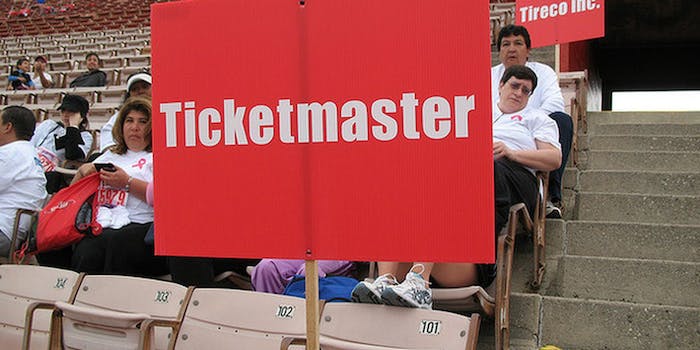 Ticketmaster knows scalper-bots buy up 60 percent of its seats

There's a reason why you can never seem to get great tickets to major Ticketmaster events.

According to my calculations, Ticketmaster currently just barely edges out Exxon and Halliburton as the most-loathed company in existence. Previously, the bulk of that hatred was thanks to the exorbitant fees it tacked onto concert tickets, ostensibly for giving you the privilege of navigating their reliably infuriating, poorly designed, and perennially buggy website. But now there’s a brand new reason to hate Ticketmaster: It knowingly tolerates ticket-buying hacker-spawned bots on its network.

The New York Times has a report about the ticket-snatching bots, which currently buy up to a staggering 60 percent of the company’s goods. For anyone who’s logged on at precisely 9am the morning that Radiohead show goes on sale only to be interminably redirected to the seating chart page—or the thousands of real people who lost their LCD Soundsystem seats to scalper-bots—this revelation will probably make you want to smash something. You’ve been hopelessly competing with virtual robots that have been programmed to buy up your tickets. You never had a shot at getting into that Arcade Fire show, no matter how furiously you clicked.

And here’s what makes the whole thing especially maddening. Ticketmaster not only knows about the bots, but, as BetaBeat notes, it’s not even trying to kick them out of its system. It’s just trying to slow them down, so humans have at least a spitting chance.

According to the Times, Ticketmaster hired John Carnahan, an anti-bot expert, back in 2011, with the express aim of getting the automated program “speedbumped”—not actually shutting them down.

“We’re not trying to stop anybody from buying tickets. We’re just trying to make sure that a fan can buy the tickets,” Mr. Carnahan says.

That “anybody” includes robots, and the black market or Stub Hub-trafficking hackers that employ them to rob 16 year-olds of their fair shot at Lady Gaga tickets. In Ticketmaster’s ideal world, real humans, playing by the rules, get a fair shot at buying those seats. That means leveling the playing field so that robots don’t swoop in and get first dibs on the goods, frustrating flesh-and-blood concert-goers out of ever using its godforsaken service ever again. But those bots are such good customers! Ticketmaster can’t thwart its most persistent and reliable customers! So it also means pitting humans and robots in online gladiatorial free-for-all combat, the victor emerging with a pair of $55 tickets that used to be easily purchased with a phone call or a couple clicks.

So apologies to all you pop fans out there; Ticketmaster doesn’t really care that you’re infuriated with the online ticket-buying process, and it doesn’t care that you have to defeat a horde of scalper-bots just to spend your hard-earned cash on a concert it is “promoting.” This is the future, puny humans—beat the robot, or no Kanye for you.

By Brian Merchant | Photo via donielle/Flickr